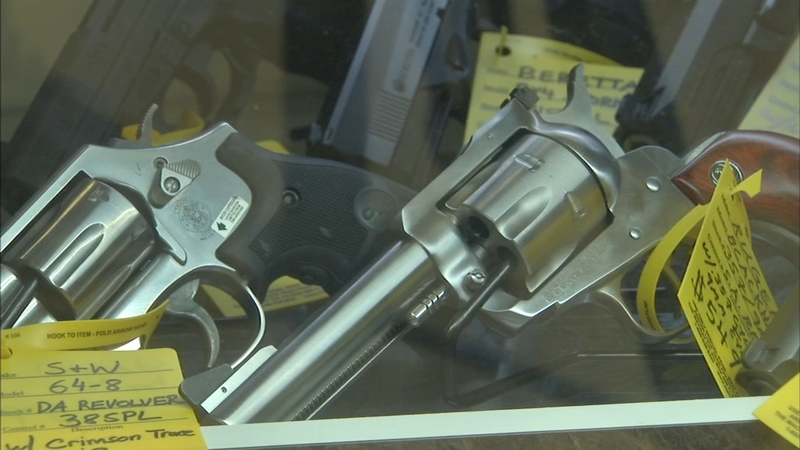 CHICAGO (WLS) -- For months the I-Team has been looking into a nationwide run on guns and especially the appetite for firearms in Illinois, following COVID lockdowns and the violence after the George Floyd killing by police.

Every time a gun is sold in Cook County, the taxpayers benefit because the gun buyer pays a tax. According to Open Records data obtained by the I-Team, business was booming last year.

Total gun tax revenue in Cook County was more than $1.9 million dollars, a tax revenue increase of 56% compared with the previous year.

Dan Eldridge, the owner of Maxon Shooter's Supplies & Indoor Gun Range in Des Plaines said that percentage mirrors close to what he's been seeing at his business.

"We're tracking that number, maybe a little bit ahead of that number, in terms of growth. It's doesn't surprise me at all. We've had in the last 12 months times of great uncertainty and in uncertain times reasonable people will take measures to protect themselves and their families," said Eldridge.

Gun sales in Cook County were especially hot in April according to the tax revenue data - more than double April of 2019.

Who is buying all the guns? A new pandemic gun-purchase report give some answers. The research on thousands of gun buyers in all 50 states was put together by Northwestern University, Harvard, Rutgers and Northeastern; and shows national background checks surged from 13 million in 2019 to 21 million last year.

Among the findings: a sizable portion of guns were bought by people who attended protests against racism or police violence and also by people "in reaction to this widespread unrest, as well as the sweeping government-mandated closures."

Those surveyed who attended President Trump rallies and protests over lockdowns and the election were nearly four times more likely to purchase guns than those who did not attend, according to the data.

By far the most common reported reason for buying a gun was protection against crime - though nearly a third said they were reacting to lockdowns, fears of the government, COVID-19, and the 2020 election.

According to the universities' research, less than a quarter of pandemic gun buyers were making first time purchases. Most already owned a gun and were buying more.

But according to the study, the majority of those who were buying guns for the first time were African-American, with a vast majority of them citing personal protection as the reason.
Report a correction or typo
Related topics:
chicagoloopcook countyi teampoliticscovid 19 pandemicsalesgunscovid 19
Copyright © 2021 WLS-TV. All Rights Reserved.
I-TEAM