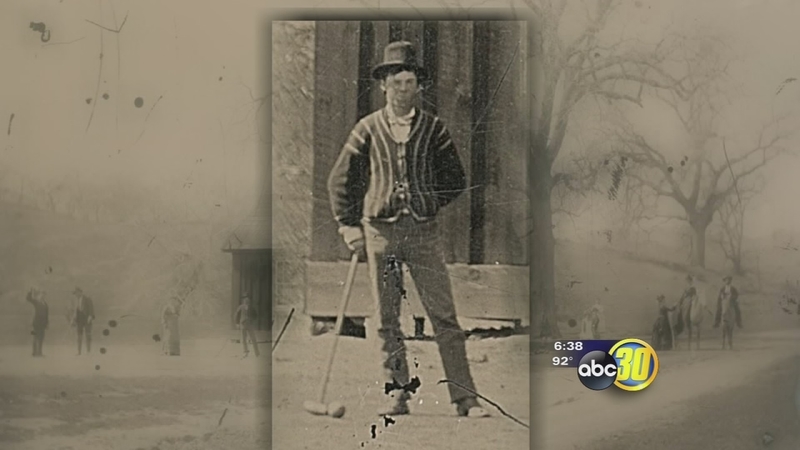 FRESNO, Calif. -- A photo bought for $2 in a Fresno shop has been described by a Western Americana expert as "The holy grail of photography."

It is believed to be just the second photo ever seen of William H. Bonney. The infamous outlaw "Billy the Kid" is actually playing croquet in the picture. A historical find was not on Randy and Linda Guijarro's mind when Randy browsed a Tower District junk store in 2010.

Guijarro said, "These were just two cardboard boxes about this long about that high."

Three photos caught his eye. Two featured women but a voice in his head told him to take the dark tin type photo of a country scene. Guijarro explained, "So I picked it back up and said, it's got a hole on top, kind of beat up. Okay so I got those three photographs for two bucks."

A picture may be worth a thousand words but this one's worth much more. It was recently authenticated by Western Americana expert Kagin's Incorporated in Tiburon. Its value set at five million dollars.

Jeff Aiello is executive director of a new documentary titled "Billy the Kid - New Evidence." It weaves a historical timeline around the discovered picture. Aiello is a former ABC30 Creative Services Director. He said, "This is the first photograph ever discovered of Billy the Kid with The Regulators, period. And that's significant in American history."

Jeff's wife Jill helped fill in some of the blanks over the past year. Sallie Chisum was identified as one of the people in the picture. Jill Aiello said, "I found that not only did Sallie Chisum have a diary but she also has a journal that predates the diary."

Identifying the other people in the picture was key in the authentication process. Randy said, "They're all doing a last tribute to Don Tunstall saying here you go boss. We're all even. This is the end of the regulators."

Aiello said they found the actual spot where the photo was taken in Chavez county, New Mexico. "We found the old lumber underneath. We found those exact rock piers are still there."

The only other iconic picture of Billy the Kid, which dates back to 1880, was sold in 2011 for $2.3 million dollars. The picture Randy bought was believed to be taken two years earlier. "Wow. This is really real. Follow the facts and the clues and it was the greatest treasure hunt."