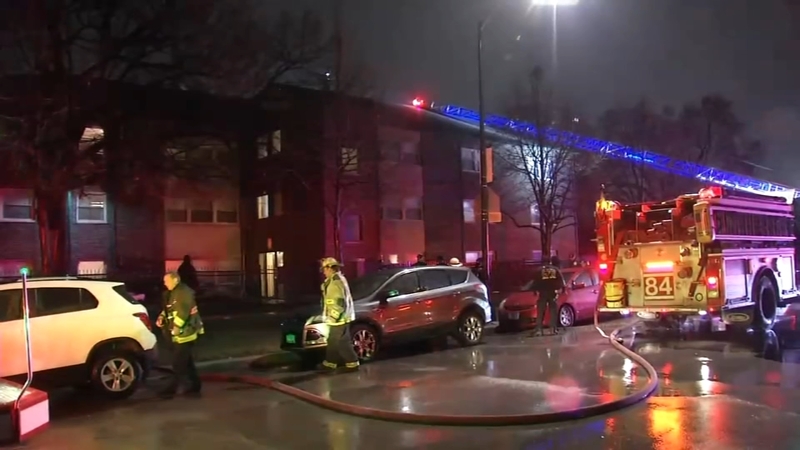 CHICAGO (WLS) -- An 8-year old Chicago girl jumped onto a mattress from her burning apartment late Wednesday night so she could escape the smoke and flames. She was home alone with two other younger children.

Chicago fire officials said the blaze was reported at a large apartment building in the 6100-block of South Wabash Avenue in Washington Park just before midnight Wednesday. Inside were the 8-year-old girl, a 2-year-old boy and a 4-year-old boy. No adults were present.

Officials said a neighbor put a mattress below a third floor window so the kids could jump to safety. The fire department said the 8-year-old girl jumped and injured her ankle. The 4-year-old boy was rescued by ladder and it was not immediately clear how the 2-year-old escaped, fire officials said.

Both boys were uninjured.

6147 Wabash apartment fire . The children a girl age ten and two boys 4 and 2 were inside. The girl threw a mattress from third floor window and jumped. 4 year old rescued at window by ladder. CFD also got 2 year old from inside all taken to Comer serious. No adult at home. pic.twitter.com/Prbu8cPwBu

After extinguishing the fire, firefighters found at least one stove burner turned to the on position inside the home. The fire is believed to have started in the kitchen and a nearby closet. It's unclear if the children were trying to cook or trying to stay warm.

"This looks like it was a kitchen fire," Chicago fire spokesman Larry Langford said. "There were no adults in the apartment at the time, but the mother was nearby."

The Illinois Department of Children and Family Services is investigating the incident. Chicago police said no one is currently in custody. A source told ABC7 Eyewitness News the mother told police she was at work and someone was supposed to be watching the children.

A witness said the smoke was so heavy they could barely see out of the building. A warming bus was ordered for the building's residents.

Fire officials said the fire was contained to just one unit.

The children were transported to Comer Children's Hospital in serious condition but are expected to recover. They remained stable but some suffered from smoke inhalation.

"I just feel like little kids like that shouldn't be left alone. There should always be an adult, like 18 or older, in the apartment, no matter what," Kendrick said.

The Department of Children and Family Services is investigating, a spokesman said.