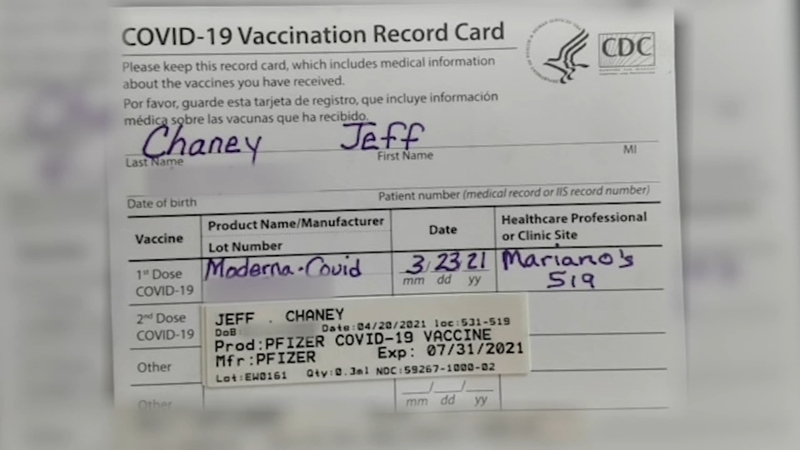 AURORA, Ill. (WLS) -- A St.Charles man is speaking out after being among eight people to have gotten the wrong COVID vaccine second dose at a Mariano's in Aurora.

Jeff Chaney said he was surprised when the pharmacy alerted him and he's questioning how they got the vaccines mixed up.

Chaney got his first dose of the Moderna vaccine from the pharmacy at the Aurora Mariano's on March 23.

On Tuesday morning, he came back for his second shot, but took a close look at his vaccine card. He was given the Pfizer vaccine instead of a follow-up dose of Moderna.

"About 15 minutes went by and the pharmacy came out and said that, 'we need you to stay here we gave you the Pfizer vaccine accidentally...I need to call my supervisor and find out what to do from here,'" Chaney said.

Eight people total had their doses mixed up at the pharmacy.

In a statement, the grocery chain said: The Mariano's Pharmacy located in Aurora, IL administered a small number of Pfizer Covid-19 vaccines to people who had received the Moderna vaccine at their first appointment. No adverse events for the affected patients have been reported. All impacted patients have been contacted. We thank these patients for their understanding and have apologized for their inconvenience. Kroger Health has reported to both the CDC and the Illinois Department of Public Health, and our team is investigating the matter and will take steps to prevent a similar situation from recurring in the future.

Chaney said he's consulted with a few doctors in his family and he feels reassured.

"They said because the same Pfizer and Moderna are made up basically the same way using the same type of formula they don't see a problem," Chaney said.

However, there is no extensive research on that. Dr. Zachary Rubin,a clinical immunologist, says the big unknown and concern: how much protection can a mix of two vaccines provide?

"While it's the same technology of mRNA vaccine technology, it's not the exact same product," Rubin explained. "There are several things that go into the delivery, the preservatives that are involved."

The CDC has said the two vaccines are not interchangeable and the "safety and efficacy of a mixed-product series have not been evaluated. Both doses should be completed with same product. If mixed, do not repeat dose."

Rubin recommends those impacted contact their physicians and suggests testing for any antibody production from the vaccine combination.

Meanwhile Chaney said he got some typical second dose side effects including fever, aches and nausea.

His son also got the wrong vaccine on Tuesday and he's doing OK.