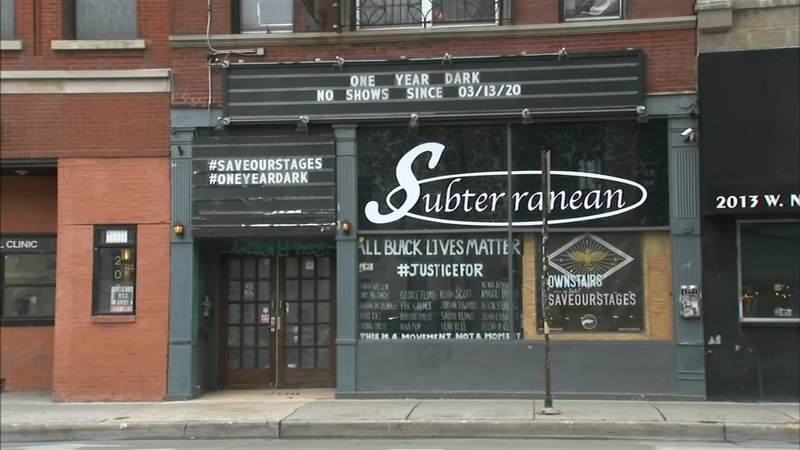 CHICAGO (WLS) -- The news that Chicago hopes to fully reopen on July 4 was welcome news to music and arts venues, shuttered now for more than a year, but it also may not be possible with everything that needs to be done to get back up and running.

It's been nearly 14 months since the lights went out at Wicker Park's Subterranean. A virtual fundraiser in support of the city's independent music venues is the only time a band has been on stage.

"Since March 14th of last year we've been completely shut down. Yeah. It's been extremely difficult," said Robert Gomez, owner of Subterranean and Beat Kitchen.

Mayor Lori Lightfoot's announcement that the city aims to reopen fully by July 4 gave Gomez hope, but also pause. Setting a date is the easy part. Booking the artists, raising the capital, is quite another.

"For us it's going to be bringing people back," he said. "Finding the labor to help us get ready and then fire up and start going."

More than 70,000 people were employed in Chicago's arts and entertainment industry pre-pandemic. Many have moved on.

At Chicago's Goodman Theatre, where they are about to launch a series of streamed live performances, they're also working towards an in-person comeback for late summer with a show that debuted just before the shutdown. The stage as they say, is set.

"It's not going to be overnight. It's not like a magic wand can be waved over and suddenly we're on stage, but we're very close," said Robert Falls, Goodman Theatre artistic director.

Close, but not July 4 close. That's the resounding message from Chicago's arts scene: they want to get back to work, but they may need just a little bit more time.

"The theatre has been around for 2,000 years. It's a pretty sturdy art form. And while it may have been down, it's not down for the count. And there is no doubt we'll be seeing people on that stage and in these audiences soon," Falls said.