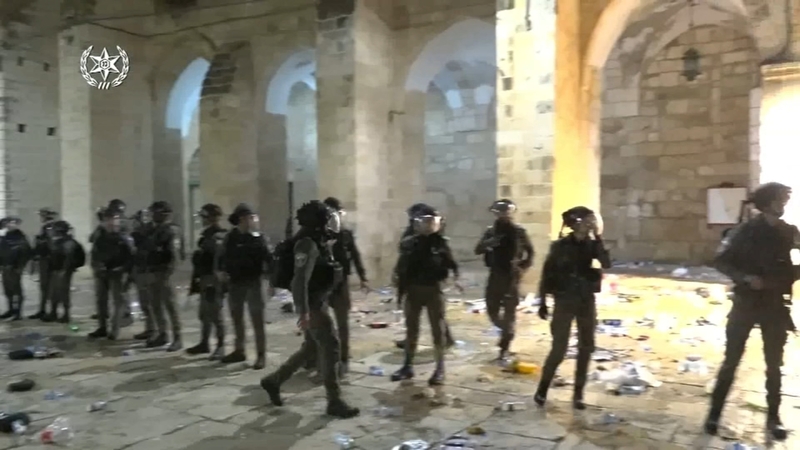 At least 100 injured in Jerusalem during clash between Palestinians, Israeli forces

At least 100 people were injured as Israeli police clashed with Palestinians in Jerusalem for a second night Saturday, according to the Palestinian Red Crescent.

All of the injured were Palestinians and most were hurt by rubber bullets or stun grenades, the Palestinian Red Crescent said Sunday, CNN reported.

The latest clashes came after as many as 205 people were injured at Al Aqsa mosque Friday, when Israeli police in riot gear clashed with Palestinians following evening prayers, according to the Palestinian Red Crescent.

Tensions have also been rising in east Jerusalem over the possible eviction of Palestinian families living in the Sheikh Jarrah neighborhood. On Wednesday night, 22 people were injured in violence there, according to the Red Crescent, two of whom needed hospital treatment.

In that incident, dozens of supporters of the families threatened with eviction gathered outside the houses in question, chanting and singing songs, with about 20 Jewish Israelis also gathered nearby playing loud music. Violence broke out after Palestinian protesters refused to follow police instruction to clear the road. As police moved in, fighting broke out.

Six of those injured Saturday were under 18 years old, including a one-year-old child, according to the Palestinian Red Crescent.

The clashes took place at several locations in Jerusalem, at Damascus Gate and in the Sheikh Jarrah neighborhood.

Israeli police said they began dispersing demonstrators at Damascus Gate after protesters threw stones, fireworks, and other objects at police officers. There were no reports of injuries among the Israelis.

Eighty-eight of those injured Friday were treated at hospitals, with most suffering from wounds caused by rubber-coated bullets, the Red Crescent said. About 20 were treated in field hospitals set up to cope with injuries from the most significant night of unrest in the city for years.

Video showed stun grenades going off across the mosque compound -- known as the Noble Sanctuary to Muslims and the Temple Mount to Jews -- with some landing inside the mosque building and scattering worshipers.

On Friday, police say at least six officers were wounded when clashes broke out after worshipers started throwing rocks and other objects. Palestinians say the unrest was triggered after some of them were prevented from entering the mosque compound and attempted to move police barricades.

Earlier in the day, tens of thousands of worshipers had gathered at the site for midday prayers.

Many waved Palestinian national flags, as well as the green flag of Hamas. They sang songs in support of the Jerusalem neighborhood of Sheikh Jarrah.

There were also chants calling on Mohammed Deif, leader of the Hamas armed wing, the Qassam Brigades, to follow through on his threat from earlier in the week to "make the enemy pay dearly (for) the aggression against our people."

"We call on Israeli and Palestinian officials to act decisively to deescalate tensions and bring a halt to the violence," Price said in a statement. "It is absolutely critical that all sides exercise restraint, refrain from provocative actions and rhetoric, and preserve the historic status quo on the Haram al-Sharif / Temple Mount -- in word and in practice."

Envoys from the four entities -- Russia, the United States, the European Union and the United Nations -- involved in mediating peace between Palestinians and Israel - are "closely monitoring the situation," the Office of the UN Special Coordinator for the Middle East said in a statement.

"The Envoys noted with serious concern the possible evictions of Palestinian families from homes they have lived in for generations in Sheikh Jarrah and Silwan neighborhoods in East Jerusalem and voice opposition to unilateral actions, which will only escalate the already tense environment," the statement said.

"We call upon Israeli authorities to exercise restraint and to avoid measures that would further escalate the situation during this period of Muslim Holy Days," it added. "We call on all sides to uphold and respect the status quo at the holy sites. All leaders have a responsibility to act against extremists and to speak out against all acts of violence and incitement."

The EU Commission also condemned the violence and expressed concern about the possible evictions.

"Such actions are illegal under international humanitarian law and only serve to fuel tensions on the ground," said Peter Stano, EU Commission lead spokesperson for Foreign Affairs and Security Policy, in a statement.

Egypt's Foreign Ministry released a statement condemning what it called "the Israeli authorities' storming of the mosque" and called on Israel to uphold its responsibility to protect Palestinian civilians and their right to practice their religion freely.

That message was echoed by Jordan's Foreign Ministry, which said, "the storming of the sanctuary and the assault on the peaceful worshipers is a grave violation, a barbaric act, and is strongly condemned and rejected."

A spokesman for Palestinian Authority President Mahmoud Abbas said the international community needed to provide protection for Palestinians and in particular urged the Biden administration to pressure Israel to stop its attacks "so that matters do not reach a stage that cannot be controlled."