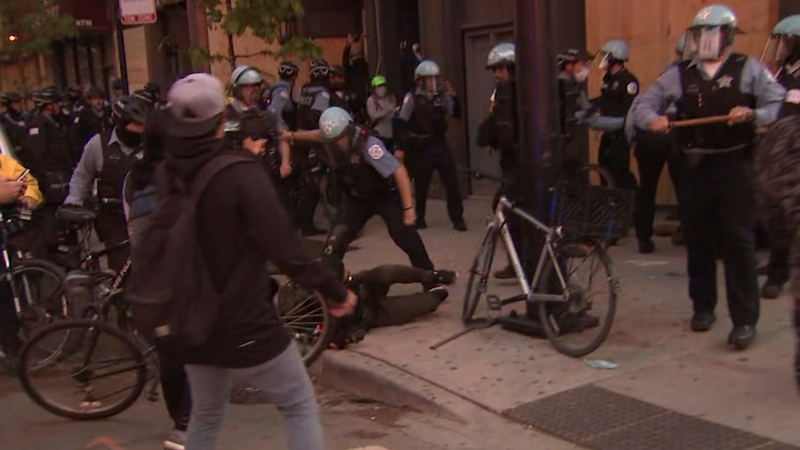 CHICAGO (WLS) -- Two men allege excessive force was used against them by Chicago police officers on May 31, 2020 in River North. That was where protesters were met by riot-equipped Chicago police. Two of the demonstrators, both college students at the time, say they were illegally brutalized and injured by officers swinging nightsticks.

"I couldn't do much thinking it was just fear for my life and panic and I just knew that I needed to get out," Gabriel Chinchilla told the I-Team.

The Columbia College Dean's List student and a friend say they were caught in the middle of mayhem that early Sunday evening.

Chinchilla said he was pushed to the ground by an officer during street protests that spiraled quickly into chaos.

"One of them grabbed me and threw me up against the wall, he hit me across the head with a baton and he threw me to the streets where a couple other police officers were just sitting there waiting for me basically to start wailing away with their batons," said Chinchilla. "And I only really managed to get out because there was a bystander who was generous enough. I can't thank them enough."

Chinchilla and his friend, fellow student John Fix, have filed federal lawsuits against the city and several police officers alleging excessive force, false arrest and conspiracy. Attorneys say these photos in the lawsuit show Fix being beaten by officers in the head and leg, plus arm injuries he suffered.

"They were hit multiple times over the head repeatedly by officers that had histories of misconduct. And when you use force on somebody, you have to fill out paperwork you can't just, he can't just hit somebody with a baton and not file paperwork didn't file anything," said Jonathan Brayman, attorney for Chinchilla and Fix.

"These lawsuits have more of a chance, post George Floyd, especially with the availability of videos...and that would be the basis of this case as well. The centerpiece would certainly be the video."

"None of the police officers tried to help anyone. Their famous slogan 'serve and protect', I didn't see anybody protected and see anybody served or helped," said Chinchilla.

One of the officers named in the suit has retired. The others are still on the force; noted in the lawsuit as part of a pattern of abuse by CPD that overlooks misconduct by some officers. A spokesperson for Chicago police tells the I-Team that the department will not comment due to the pending litigation.
Report a correction or typo
Related topics:
chicagoriver northprotestlawsuiti teampolice brutalitychicago police department
Copyright © 2021 WLS-TV. All Rights Reserved.
I-TEAM
COVID tops cause of death for police for past 2 years
Government mandate tells phone companies to block robocalls
Jan. 6 insurrection yields biggest federal investigation in US history
5 charged in Gold Coast shooting of rapper FBG Duck
TOP STORIES
FOP pres. posts video after ordered not to talk about vaccine mandate
Man critically injured in Wicker Park shooting: police
COVID tops cause of death for police for past 2 years
Shooting death of 15-year-old in Brainerd ruled a homicide
IN kids mistakenly get COVID vaccine instead of flu shot: parents
Mom delivers 14 lb. baby after suffering 19 miscarriages
Chicago's 'must stop' Mexican restaurant is more than tacos
Show More
Chicago Sky take on Phoenix Mercury in WNBA Finals Game 3
New Chicago postmaster defends changes to mail delivery
Lincoln Park building catches fire near CTA tracks
Police search for double homicide suspects in Tinley Park
Naperville North HS cancels class after threat for 2nd time in a month
More TOP STORIES News