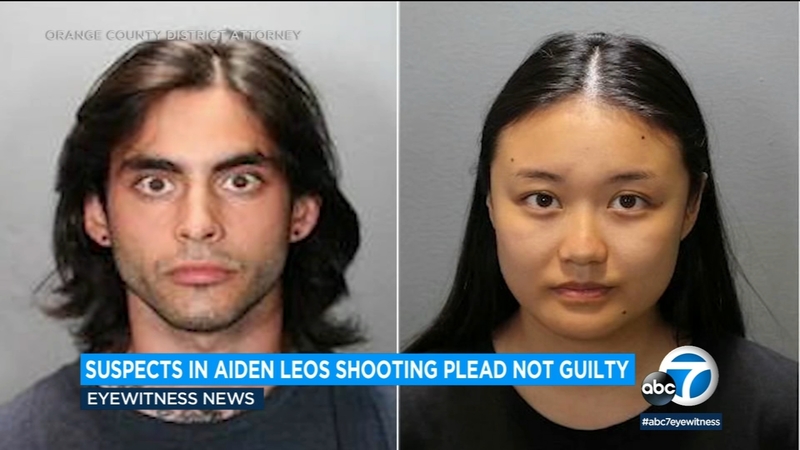 Couple accused in killing of Aiden Leos plead not guilty

SANTA ANA, Calif. -- The couple accused in the southern California road-rage shooting that killed 6-year-old Aiden Leos have pleaded not guilty to the charges against them.

Eriz, who was previously being held on $2 million, was ordered to remain jailed without bail. Judge Larry Yellin said Eriz's alleged actions during the shooting and after, with prosecutors alleging he wielded a gun at another motorists days later, were "alarming."

Bail for Lee, who is charged as an alleged accessory in the shooting death of the boy, will remain at $500,000, but Orange County Superior Court Judge Larry Yellin has asked that Lee undergo a background review ahead of another bail hearing set for next Friday.

A pretrial hearing was scheduled for Aug. 27.

Days after Aiden Leos was fatally shot on the 55 Freeway, the suspects ​got into another traffic altercation in which the alleged shooter waved a gun at another motorist, prosecutors say.

According to court documents, Eriz allegedly pulled out a gun and fired at a car on the 55 Freeway in Orange that was being driven by a woman who made a rude gesture toward him on a freeway while he was on his way to work on May 21.

The shot killed Aiden while he sat in a booster seat in the back of his mother's car on his way to kindergarten, prosecutors have said.

Days later, a co-worker told Eriz that authorities were looking for a car similar to the one he used with Lee, who since has been charged with being an accessory after the fact, the court filing said.

After a 6-year-old boy was fatally shot in an apparent road-rage attack in Orange Friday morning, the child's sister spoke out about the heartbreaking loss.

Eriz then hid the car in a relative's garage and instead started using a red truck, shaved his beard and began pulling back his hair, prosecutors said in the document.

Days after Aiden was killed, prosecutors said Eriz brandished a gun at another driver on the freeway.

"This brazen act of threatening other commuters with a loaded firearm shows this Court that the Defendant cannot control his emotions and the smallest event can set him into a deathly rage," prosecutor Whitney Bokosky wrote in the filing.