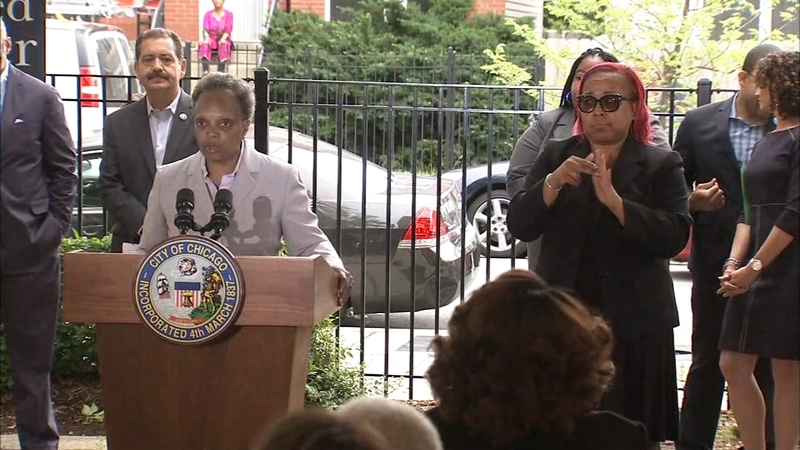 Mayor Lightfoot was also joined by other civic and community leaders during the launch of the campaign, which is a joint venture between multiple organizations.

"Mayor Lori E. Lightfoot and the Chicago Department of Housing (DOH) today joined Alderman Michael Scott (24th Ward) and other civic and community leaders to launch the Reclaiming Communities Campaign, a joint venture between Chicago Neighborhood Initiatives (CNI) and Lawndale Christian Development Corporation (LCDC) in partnership with United Power for Action and Justice (UPAJ). The Reclaiming Communities Campaign is aimed at creating 'communities of opportunity' to release vacancy, violence, and decades of disinvestment with affordable homes and opportunities for families to build generational wealth and equity. The Campaign will build 250 new homes for buyers as their principal residence in North Lawndale, a key INVEST South/West community. UPAJ has an aspirational goal of building 1,000 affordable new homes on the South and West Sides to help residents build generational wealth through homeownership.

'For many Black and Brown folks, homeownership has become an elusive pipe dream due to decades of discriminatory practices such as predatory loans, redlining, segregation and more,' said Mayor Lightfoot. 'It is crucial that we address the modern-day manifestations of these practices by providing our residents with what they need to achieve homeownership-which has time and time again proven to be a key indicator of future financial stability and generational wealth. Through 'Reclaiming Chicago,' we will be able to create a new wave of Black and Brown homeowners and as a result, improve our communities from the inside out for years to come.'

The City of Chicago will sell 250 city-owned lots to the Reclaiming Communities Joint Venture for $1 each and streamline the acquisition process that will help to reduce construction costs to keep the homes affordable. The City has also designated $5.3 million from the Midwest and Ogden/Pulaski TIF for site remediation and lot preparation. This campaign builds upon Mayor Lightfoot's ongoing, signature neighborhood investment initiative, INVEST South/West. INVEST South/West leverages more than $750 million in funding for equity-focused and inclusion-driven commercial development projects in 10 target communities-including North Lawndale.

'The impact that homeownership has on building generational wealth is a benefit that has been denied to many of our Black and Brown residents on the South and West sides for far too long- not only due to historical racially discriminatory housing practices, but also due to present day lack of lending and investment,' said DOH Commissioner Marisa Novara. 'This exciting partnership is a step toward repairing the intergenerational harm of private and government wealth extraction from Black Chicagoans.'

As part of its commitment to keep the homes affordable, UPAJ has secured $10 million in the state's budget that passed the Illinois General Assembly last May to provide an average homebuyer subsidy of $30,000 to prospective buyers. UPAJ has also secured commitments totaling $27.55 million to launch Reclaiming Communities, including $12.25 million from private sector sources for a revolving construction fund from JP Morgan Chase, The Steans Family Foundation, The Owens Family Foundation, Pete Villim and The Roche Family Foundation.

'In September 2019, the mayor met with 1,251 people from United Power here in North Lawndale and committed to work with us on this visionary approach, and we want to recognize that she has kept her word,' said Richard Townsell, executive director, Lawndale Christian Development Corporation. 'We are poised and ready to generate affordable homeownership at a scale and on a timetable that is meaningful for working families and individuals who want to live and work in safe, vibrant communities in Chicago.'

Denita Robinson, a leader with North Lawndale Homeowners Association, said 'We need the new homes to be built under the watchful eyes of the North Lawndale community on 1,000 city-owned vacant lots in order to right past wrongs and transform eyesores into owner-occupied homes that boost the economy, and help overcome violence in our community. With the mayor's and the local alderman's support, involvement by the city council and the state legislature, and significant federal and private-sector dollars already secured, we are ready to make this happen, starting today in North Lawndale.'

The Reclaiming Communities Campaign represents part of Mayor Lightfoot's commitment to directing support and resources to communities on the South and West sides of the City that have experienced decades of disinvestment and decline. Earlier this week, the City announced its selection as one of the 2022 Vacant Property Leadership Institute's (VPLI) delegates and the formation of an interdepartmental working group to help develop new solutions to shift the systems responsible for vacant, abandoned, and other problem properties. The VPLI is a joint initiative of the Center for Community Progress and National League of Cities (NLC) made possible through the support of the Wells Fargo Foundation. For more information about the Vacant Property Leadership Institute and the Center for Community Progress, visit https://www.communityprogress.net/."
Report a correction or typo
Related topics:
societychicagonorth lawndalefyi homelori lightfoothome equityhousingaffordable housing
Copyright © 2021 WLS-TV. All Rights Reserved.
AFFORDABLE HOUSING
Modular homes could be an affordable housing game changer
Crews break ground on Casa Durango affordable housing in Pilsen
Illinois evictions resume amid housing shortage
Pullman lofts open to provide affordable housing for artists
TOP STORIES
FOP pres. posts video after ordered not to talk about vaccine mandate
Man, 55, shot in Wicker Park amid robbery attempt near 6 corners
COVID tops cause of death for police for past 2 years
Chicago Sky take 2-1 lead over Phoenix Mercury in WNBA Finals
Mom delivers 14 lb. baby after suffering 19 miscarriages
Shooting death of 15-year-old in Brainerd ruled a homicide
IN kids mistakenly get COVID vaccine instead of flu shot: parents
Show More
Chicago's 'must stop' Mexican restaurant is more than tacos
New Chicago postmaster defends changes to mail delivery
Lincoln Park building catches fire near CTA tracks
Police search for double homicide suspects in Tinley Park
Naperville North HS cancels class after threat for 2nd time in a month
More TOP STORIES News