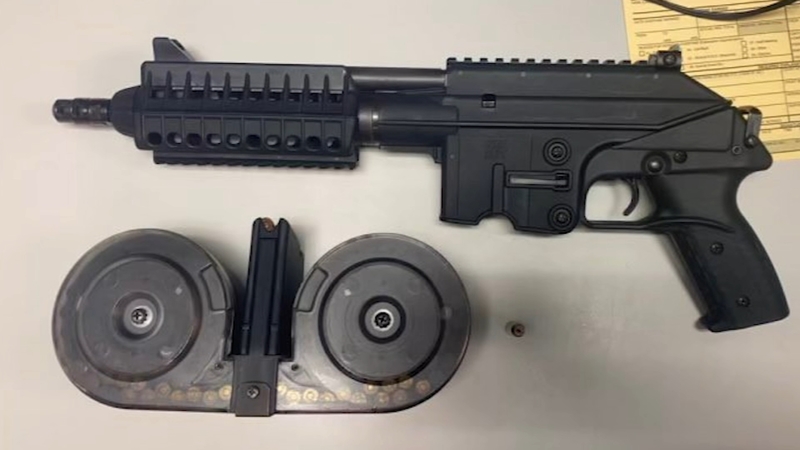 CHICAGO (WLS) -- Police in Chicago and in other cities are seeing a surge in crime guns specially equipped to spray a hail of bullets in very little time.

In tweets recently posted by the Chicago Police Department there are images of the guns that look a lot like the old Tommy guns Al Capone once used in Chicago. The 2021 versions of the menacing looking firearms have what are called drum magazines that can hold 60 rounds of ammunition and more. According to police the high-capacity magazines are popular these days with Chicago drug gangs.

Last week on the city's South Side, as motorist Huber Pereznegron was sitting mid-morning traffic, his car's dash cam recorded someone jumping out of a car with a gun equipped with a drum magazine.

"It looked like to be a machine gun with a plastic magazine, a clear plastic magazine at first I didn't think it was real because I said, I don't think it was real," he said. "It just shocked me, it surprised me at first but then I saw the other guy get out from the right side. I then noticed him with a gun as well and then they started shooting."

Somehow, no one was hit by the gunfire. Chicago police say the incident is under investigation.

"I never would have expected this to happen, never in my life and not that early. At least, you know, I hear about all these things happening and I usually think that happens at night or later," said Pereznegron.

In an unrelated case, CPD said 25-year-old Jules Baldwin was arrested last Saturday as a felon in possession of a firearm. According to authorities, Baldwin had been paroled in January after serving timing in Stateville for attacking a police officer. On Saturday they say he was caught in possession of a pistol with a drum magazine. He's now being held in Cook County jail on a $50,000 bond, according to sheriff's records.

In a news conference to address two weekend mass shootings, CPD Superintendent David Brown had no specifics on the weapons used, but speculated that high capacity magazines were involved.

"A high capacity magazine drum or banana clip or a high capacity rifle with the extension ought to have more serious consequences. Because that is what causes the multiple victim victimization of people when shots are fired without the need to reload," said Brown.

It's not just a problem in Chicago. Dozens of shots were fired from a double drum gun during an incident a week ago in Detroit. A father and his 11 year old son are among the wounded.

"The large capacity drum magazines are essentially a novelty item. We don't sell a whole lot of them," he said.

Eldridge said they are made of plastic and perfectly legal.

President Biden wants to ban the public sale of drum magazines and all high-capacity attachments. During his new anti-violence proposal announced last week he said nobody needs a weapon that can fire 30, 40 or 100 rounds.