Biden will be the 1st sitting president to visit the suburban community
WLS
By Diane Pathieu, John Garcia and Cate Cauguiran 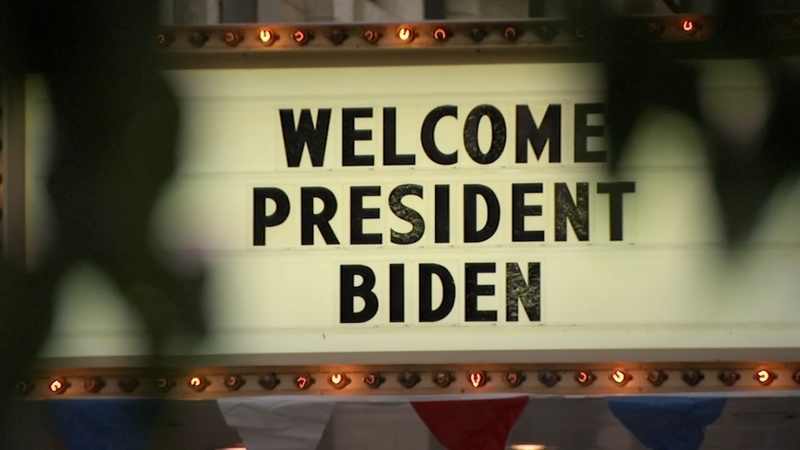 The details of the visit remain under wraps, but the community is buzzing with enthusiasm and pride on the eve of their first ever visit by a sitting president.

"The fact that he wanted to come here to Crystal Lake says a lot about who I think Joe Biden is," said resident Michael Zellmann. "He's open and I believe the people are willing to listen."

Government helicopters took off from a field on the grounds of McHenry County College, as crews unloaded equipment into the auditorium in anticipation of the visit. Signs welcoming President Biden can be seen across the downtown area, but his agenda has yet to be revealed except for that one stop.

"I'm very excited about President Biden coming to Illinois. He is expected to talk about the American Families plan," said Governor JB Pritzker

"We've never had a President come to the college so it's exciting," said Crystal Lake resident Wally Leckner.

"I got some debt. President Joe if you wanna pay that off that would be amazing. Send it my way. I would gladly receive it," said Jordan Tratscher.

"When you look at McHenry County we have historically been Republican, and Crystal Lake is an amazing community and we are incredibly open to hearing what any politicians has to say especially our president," Zellmann said.

Republican leaders however said they believe the president should visit Chicago and meet with Mayor Lightfoot about addressing the issues of crime and violence.

"There is a crisis going on in that city and it would be a dereliction of duty for him to fly over Chicago," said RNC spokesperson Paris Dennard.

Mayor Lightfoot confirmed meeting with President Biden is part of his agenda. She said common-sense gun control laws will be her first priority their talks.

Some in Crystal Lake's downtown hope the president swings by the Kaleidascoops Ice Cream shop. The owner of the clothes gallery next door is ready.