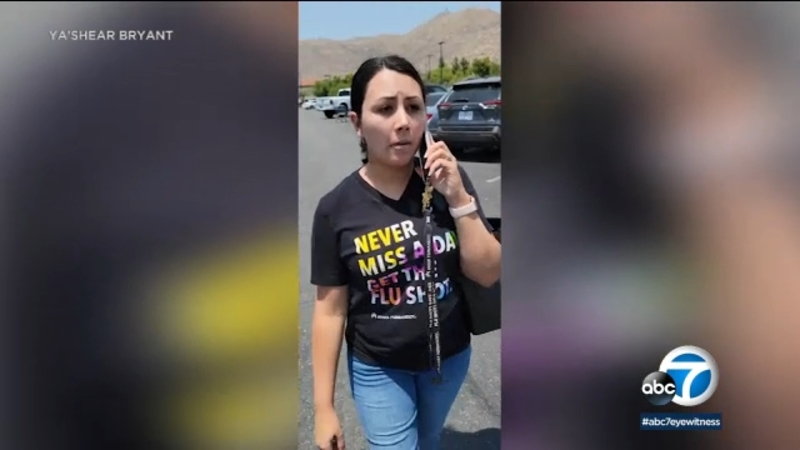 MORENO VALLEY, Calif. -- A man turned the tables on a woman who he says racially profiled him, falsely accusing him of stealing her son's cellphone at Walmart in California.

The video he recorded went viral, and he's hoping it provides a valuable lesson for his children.

The parking-lot confrontation occurred July 12 after Ja'shar Bryant was shopping in the store and overheard a woman asking her son what happened to his cellphone.

The phone was missing. When the woman accused Bryant of stealing it, following him to the parking lot, he began recording a video.

"She runs up to me and says, 'Excuse me, you have my son's phone?'" Bryant recounted. The woman threatened to call the police. In an interview with ABC7, Bryant said that scared him, so he stayed.

In an interview with ABC7, a witness described his reaction after recording a now-viral video that shows a retired Los Angeles Police Department hurling racial slurs at a Black man after a minor traffic collision.

"I did not want to look guilty, getting in my car," he said, adding a hypothetical: "She would then be on the phone with police, telling them, 'He stole my phone.' They pull me over, I don't have a phone, they say I done sold it or something, I'm getting beat up."

The incident ended when the woman's son found the phone, which had apparently been in their car. She then walked away without offering an apology.

Bryant said he thinks his accuser should lose her job,. He added that if her employer fails to fire her, it signals that they support her behavior.

"This video has been brought to our attention and we are actively investigating it," Kaiser Permanente said in a statement provided to ABC7. "We are still learning all of the facts and circumstances surrounding the incident. Kaiser Permanente is committed to fostering equity and inclusion in our workforce, and ensuring we remain a safe and welcoming place to obtain care for our members, and the communities we serve."