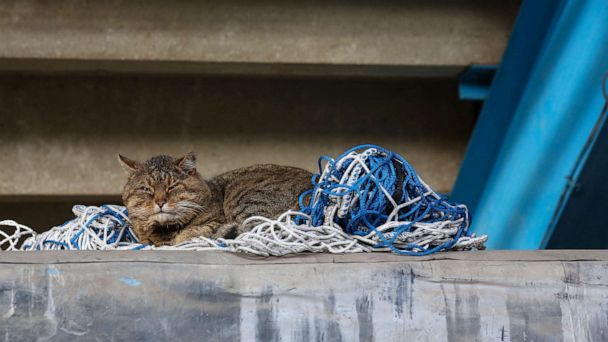 At least 330 cats in the United Kingdom have died from a rare illness that could be linked to toxins in cat foods that have been recently recalled.

The condition, called feline pancytopenia, is when the number of red blood cells, white blood cells and platelets decreases rapidly and results in serious illness, according to the Royal Veterinary College (RVC) in London.


As of Monday, Aug. 2, at least 528 cases of feline pancytopenia have been reported, according to the RVC.

The RVC said the mortality rate among reported cases is 63.5% and the actual number of cases is likely much higher.

The RVC first raised the alarm about the spike in severe feline pancytopenia cases in late May. To date, the cause of the deaths is yet to be officially identified.

The RVC and Food Standards Agency in the UK (FSA) are investigating the cat deaths and possible causes.

The agencies are looking into several cat food brands -- including Sainsbury's hypoallergenic cat foods and Pets at Home's Applaws and AVA cat foods -- that were recalled in June. The FSA said the outbreak of pancytopenia could be linked to the recalled cat products.


"Our investigations areongoingand we are still collecting data from practicing veterinarians, as well as testing food samples associated with affected and unaffected cats to determine the significance of these findings. We have shared our results with the FSA in order to assist them with their investigations into this matter," RVC said in a statement.

The dry cat food brands pulled off shelves were manufactured by Fold Hill Foods. The company told ABC it "issued a voluntary and precautionary recall of selected cat food products after the FSA made us aware they were investigating a potential link between these cases and diet. This was fully supported by the FSA."

"As stated by the FSA, there is no definitive evidence to confirm a link at this stage between the cat food products and feline pancytopenia," a spokesperson for Fold Hill Foods said, noting it is cooperating with the investigation. "As cat owners ourselves, we fully understand how upsetting and stressful this situation is and the urgent need to establish why there has been an increase in cases of Pancytopenia in the U.K."

The FSA said in a July 16 update that the presence of mycotoxins was identified "in a small number of samples of recalled cat food tested to date."

Mycotoxins are toxic compounds naturally produced by some kinds of fungi, according to RVC. They can grow on different crops like grains and vegetables and appear on foods like cereals, nuts, and dried fruits, often under warm and humid conditions, the RVC said.


"Mycotoxins are widely found in some types of feed and food and do not, in themselves, indicate they are the cause of feline pancytopenia," the FSA said.

The FSA and other regulators are continuing to investigate and will conduct wider samples and screenings for any possible toxins in cat feed.

Pet owners should check their cat food at home to make sure they're not using recalled items. If yes, stop feeding the food immediately and contact local vets if concerned about a pet's wellbeing, the FSA said.