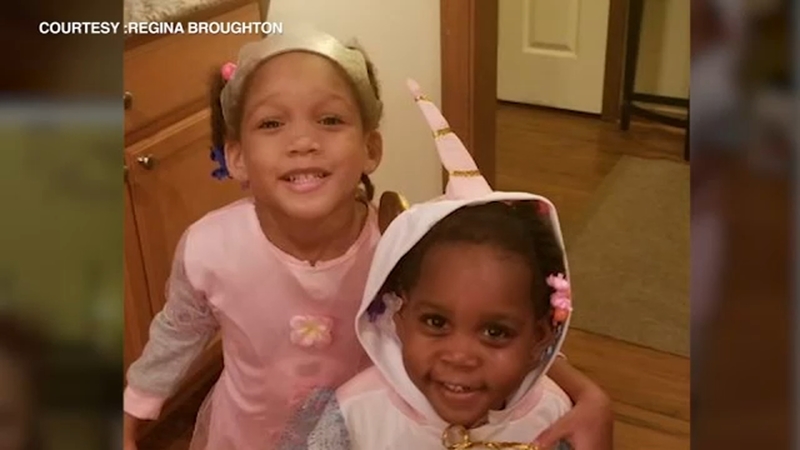 Girl, 7, killed, sister 'fighting for her life' after shot on NW Side

CHICAGO (WLS) -- A 7-year-old girl is dead and her 6-year-old sister is "fighting for her life" after they were shot Sunday in Belmont Central on the city's Northwest Side, according to Chicago police.

The two girls were in a vehicle parked on the street just before 3 p.m. in the 6200 block of West Grand Avenue when they were both shot, police said.

BREAKING—ANOTHER CHILD KILLED. Chicago Police say a 7-year-old girl is dead and a 6-year-old is in the hospital after both were shot in the 6200 block of w Grand this afternoon. Latest LIVE @ABC7Chicago at 5 pm. pic.twitter.com/2YyC4JuJZW

"Like a machine gun going off, like, you know what I mean, like two people shooting at each other or something," said Alberto, who lives near the scene.

The 6-year-old sustained a gunshot wound to the chest and right armpit, and was transported to Loyola University Medical Center in stable condition.

The 7-year-old was also shot in the chest, but later died at the hospital, officials said.

The family identified the girls as Serenity, 7, and Aubrey, 6.

NEW: Regina Broughton tells me the girls shot are her granddaughters (pictured here in a photo shared by family). The girl on the left, Serenity Broughton, is the 7-year-old killed, according to the grandmother. Hear what she says the world lost, ahead in @ABC7Chicago. pic.twitter.com/GPzrlTkBO4

Broughton said their mother was buckling them into the car and their dad was on his way over to the car when the pair was shot.

"It's sad man cuz two little girls can't even play out and now the two of them got shot and one passed away," Alberto added. "It's sad... kids are getting killed left and right."

Devastated by the loss of one of her grandchildren, Broughton said the 7-year-old was supposed to take her very first plane ride in just two days.

Police said the girls are sisters and don't believe they were the intended targets.

A 7-year-old girl is dead and her 6-year-old sister is "fighting for her life" after they were shot Sunday in Belmont Central on the city's Northwest Side, according to Chicago pol

"[Aubrey] keeps saying it's not -- no, it's not your fault, Mommy. It's not your fault," Broughton described. "This is too big of a weight for a child, this is senseless violence has to stop because this is not right. She was a beautiful light and just taken."

Area Five Detectives are investigating and working to collect any surveillance video in the area.

A $2,000 reward is being offered for information leading to an arrest and conviction, community activist Andrew Holmes said Sunday.

"Come forth and take responsibility. Whoever sees this, turn them in, it was a child, she didn't deserve this," Broughton added. "If you have any kind of heart, step forward do what you're supposed to do, and do what a decent human being should do."

"It's not about the money it's just about catching these individuals before they strike and hit another child. Stop killing our children," Holmes said.

More than 250 children have been shot and 32 killed so far this year in Chicago, according to ABC7 Chicago data.

"Too many young people have lost their lives to senseless gun violence in Chicago," McDermott said.