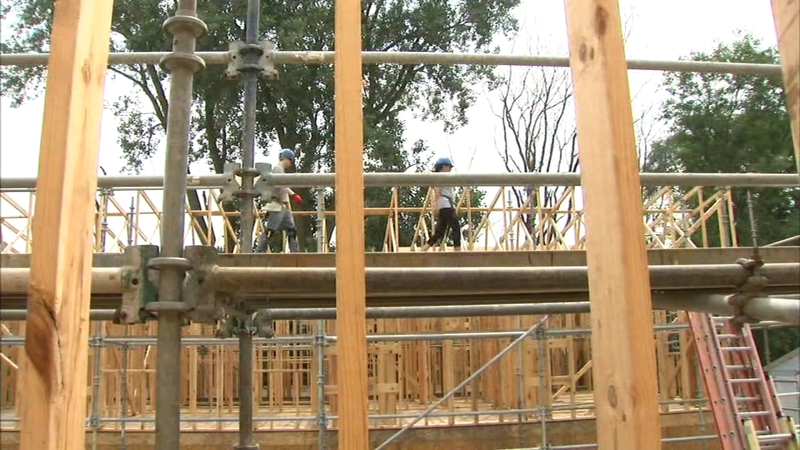 CHICAGO (WLS) -- Construction plans are taking a hit as material costs rise, and the problem isn't just lumber. The pandemic is slowing down plans and in some cases, organizations could be just paying more than double the amount originally budgeted.

"Just for the basic framing of the framing lumber," explained Jen Parks, who runs Chicago's Habitat for Humanity.

Her team saw a lumber crisis coming. As prices soared in spring, the organization charged ahead with a new phase of affordable homes in West Pullman.

"I'm really grateful to my team who was in front of it to say we need to buy now so we staved off further increases," Parks explained. "It was a choice by our team to say let's go ahead and get it now so we don't have to pay those higher costs later on."

Park's team over-bought lumber when prices doubled which saved them from having to buy again as prices tripled later in the summer. That decision kept them on track to build those 14 new homes.

Lumber prices have recently dropped some giving Parks some relief for future projects . But other construction costs remain high.

"Concrete continues to rise in price. So every time we put in a foundation that concrete expenditure has gone up about 13% over normal. We've seen the same thing with copper, you know, putting in copper plumbing," Parks said.

"The steel industry ,the copper industry are also facing similar, you know, price issues. A lot of that is, you know, due to these kinks in the supply chain. For some companies, it's an issue with labor, where they just don't have the labor supply, they don't have enough employees working in their factories or mills, so they just cannot be at 100% capacity for full output," explained Sean Coary, an economist at Loyola's Quinlan School of Business. He said the pandemic hit the supply chain hard.

"A lot of the raw material costs that we use for home construction is imported from other countries where the vaccine is not readily available, and therefore their factories are at or have either shut down or at reduced capacities, just because they do not have the ability to you know vaccinate their workers to operate in a safe condition," Coary added.

There are three construction projects underway in Elmhurst School District 205 that are now over-budget thanks to the rising costs.
Millions will need to be added to the project budget to cover the 21% cost increase, since voters approved a bond for the plan back in 2018.

Habitat hopes costs will eventually come back down to keep on track with next year's plan to continue revitalizing neighborhoods.

"Long term? The concern is how many homes can we continue to build, and can we stay at that, you know, at that double-digit level can we continue to do 11, 15, ultimately get to 20 or more homes a year," Parks said. "If those costs continue to rise year over year, we're gonna really struggle to keep pace with that."

Experts say it's anyone's guess as to when construction prices will come back down, if ever.