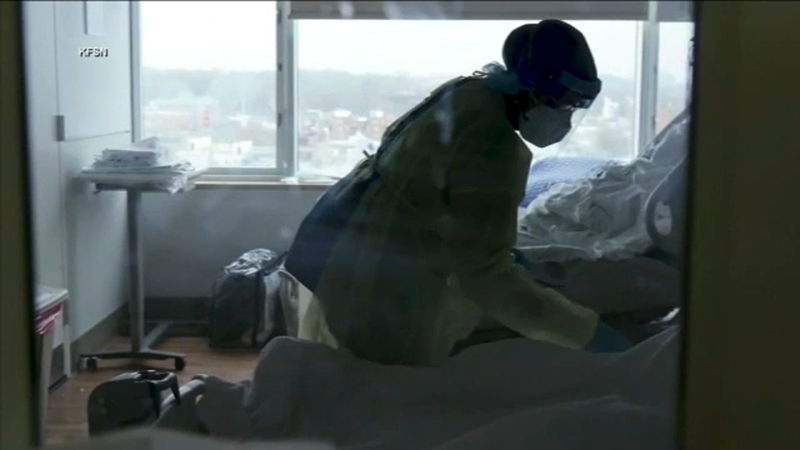 NEW YORK -- The latest data from the CDC shows that COVID-19-associated hospitalization rates among U.S. children rose rapidly during late June to mid-August.

Particularly concerning is the rate among children aged 0-4 years, which was nearly 10 times the rate seven weeks earlier.

The CDC said the increases coincide with widespread circulation of the highly transmissible delta variant.

Already vaccinated against COVID? Experts say you're protected
Health experts are reinforcing the point that full vaccination remains highly effective against severe illness and death caused by COVID-19 as federal regulators consider the possibility of authorizing a third dose in the upcoming weeks. "What's the goal of this vaccine? The stated goal by (CDC Director Dr. Rochelle Walensky) and others is to prevent serious infection, and all the data today, published by the CDC, presented by the CDC, is it's done exactly that," Dr. Paul Offit, a top vaccine expert and US Food and Drug Administration adviser said Friday. "There's been no evidence of clear erosion of protection against serious disease," he said. The conversation around vaccines has fluctuated because health experts are learning new information about the coronavirus and its variants. But amid the debate, experts are consistent in noting the effectiveness of the COVID-19 vaccines.

Autoimmune COVID-19 booster clinical trial underway on LI
A clinical trial underway on Long Island is examining the efficacy of a third COVID shot for people with autoimmune disease who did not respond to an original COVID-19 vaccine. The trial is being conducted at the Feinstein Institutes for Medical Research in Manhasset and is being sponsored by the National Institute of Health. Doctors say these studies are important because they will help us reach immunity to COVID-19, as people who have autoimmune disease are also at higher risk of getting infections. "It's important because we need to achieve immunity to COVID. and these are people who have autoimmune disease, they're at higher risk of getting COVID infections if they do get infected," principal investigator Dr. Meggan Mackay said. Doctors are encouraging everyone who believes they may be eligible to volunteer for the study.

Is the mu variant worse than delta? What to know about COVID-19 mutations
The Centers for Disease Control and Prevention listed the COVID-19 delta variant as one of its "variants of concern" (VOCs) on June 15. According to the CDC, VOCs can be more contagious, more dangerous, less susceptible to available treatments or harder to detect. The uncontrolled spread of SARS-CoV-2, the virus that causes COVID-19, means the virus is mutating quickly. That's why many new variants are being discovered in places with the highest infection rates and large numbers of unvaccinated individuals, like the United States, the United Kingdom, India and Brazil. "Viruses mutate; they change their form all the time," said ABC News medical contributor, Dr. Simone Wildes, a board-certified infectious disease physician and public health expert at South Shore Health in Weymouth, Massachusetts.

Federal unemployment benefits to expire as Delta variant poses renewed threat to economy
Millions of jobless Americans who have depended on federal unemployment aid as a financial lifeline are about to lose those benefits just as the delta variant of the coronavirus poses a renewed threat to the economy and the job market. Two programs - one that provides jobless aid to self-employed and gig workers, the other to people who've been unemployed for more than six months - will expire Monday. As a result, 8.9 million people will lose those weekly benefit payments, according to an estimate by Oxford Economics. An additional 2.1 million people will lose a $300-a-week federal supplemental unemployment payment, which also expires Monday. These recipients will, however, continue to receive state unemployment benefits.

August jobs report: US hiring slows to just 235,000 new jobs after 2 strong months
America's employers added just 235,000 jobs in August, a surprisingly weak gain after two months of robust hiring and the clearest sign to date that the delta variant's spread has discouraged some people from flying, shopping and eating out. The August job growth the government reported Friday fell far short of the sizable gains of roughly 1 million in each of the previous two months. The hiring jumps in June and July had followed widespread vaccinations that allowed the economy to fully reopen from pandemic restrictions. Now, with Americans buying fewer plane tickets, reducing hotel stays and filling fewer entertainment venues, some employers in those areas have slowed their hiring. Still, the number of job openings remains at record levels, with many employers still eager for workers, and overall hiring is expected to stay solid in the coming months. Even with August's tepid job gain, the unemployment rate dropped to 5.2% from 5.4% in July. With many consumers still willing to spend and companies to hire, the overall U.S. economy still looks healthy.

Majority of companies plan to have COVID-19 vaccine mandates, survey finds
Ready to travel to some major US cities? Better hold on to your vaccination card! Once a touchy subject in the private sector, a new survey indicates that most firms are now planning on having COVID-19 vaccine mandates for their workforce. The number of companies requiring workers to get the shot is expected to surge over the next several months, according to data released by Wednesday by Willis Towers Watson, a multinational advisory and insurance firm.
Over half of the employers surveyed (52%) said that by the fourth quarter of 2021, they could have one or more vaccine mandate requirements in the workplace. This ranges from requiring vaccinations for employees to access common areas (such as cafeterias) to requiring the jab for a subset of specific employees to requiring it for all employees. This is a major hike from the current 21% of firms that have some type of vaccine mandate in place for employees.