Ready or not, Bears QB Fields starting against Browns 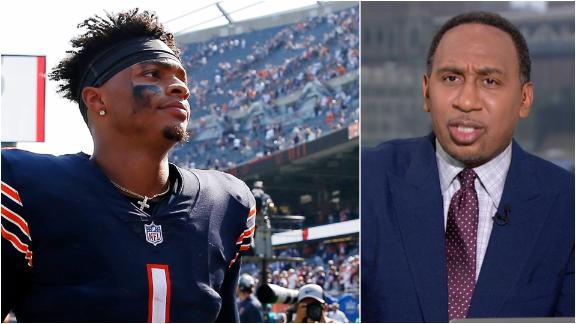 CLEVELAND -- - There was going to be a point, maybe later this season or early next, when Justin Fields was going to become Chicago's starting quarterback.


With veteran Andy Dalton sidelined for the time being by a knee injury, Fields will make his first NFL start on Sunday as the Bears visit the Cleveland Browns, who are still waiting to put together a complete game after two uneven performances.

Ready or not, Fields is on the field.

Dalton's injury forced Bears coach Matt Nagy to make the switch and come to a decision some Chicago fans finalized the moment the team drafted Fields, the former Ohio State star, with the No. 11 overall pick.

The plan was to bring Fields along slowly. In the NFL, plans can change in a snap.

"I think I'm ready," Fields said shortly after Nagy announced his start. "I've been preparing for this moment for a long time."

The 22-year-old has gotten a taste of what to expect after playing in select packages in Week 1 against the Rams and then getting more reps last week after Dalton got hurt against Cincinnati, his former team.

Starting will be different, of course, but Fields is no ordinary rookie. He played on big stages with the Buckeyes, and that experience should help him deal with Cleveland's howling crowd and a hostile environment inside FirstEnergy Stadium.

Fields has impressed the Bears with his poise, which he admitted has not always been a strength.

"I used to not be this way," he told reporters. "I definitely learned from past experiences, past first starts. I still remember my first start in high school, I was nervous as can be. I think being more this way just being stoic and being even-keeled, I think that just keeps my mind calm and allows me to think more."

Cleveland's defense, which has had its issues through two games, particularly on third downs, will try to rattle Fields by disguising coverages and pressuring him. Browns coach Kevin Stefanski has seen enough of Fields on tape to know he can be dangerous.

"Dynamic," Stefanski said when asked what jumped out to him. "He made plays with his arm. He had a nice throw into the end zone there in one of those drives. Made plays with his feet late. There is no shortage of things they can do with him, and I am sure now with a full week of practice they can expand upon that."

Nagy has stressed that Fields is just holding down the starting job until Dalton's healthy.


That plan could be in jeopardy next.

Barring a last-minute setback, Cleveland's speedy wide receiver is expected to play for the first time since suffering a season-ending knee injury in October. As he went through months of grueling therapy, Beckham said he never considered retirement.

"I'm not the kind of fighter who got knocked out on the last fight and I'm going to hang it up," he said. "I've got to come out and fight again."

The Browns could use Beckham after losing dependable and durable receiver Jarvis Landry to a sprained knee last week. Landry, perhaps the team's strongest leader, will miss at least three games after going on injured reserve.

The Bears got the bounce-back performance they needed last week after being shredded by Rams QB Matthew Stafford in the opener.

Chicago's defense forced turnovers on four consecutive possessions, picking off three straight passes by Joe Burrow. Linebacker Roquan Smith ran one of the picks back for a touchdown, but the Bears got just two field goals off the other three takeaways.

"We need to fix that," tight end Cole Kmet said. "If we want to be the team we want to be and make a run this year, that stuff can't happen. So we need to be able to capitalize on those opportunities."


It's one thing to give up chunk yardage to Kansas City, but Houston ripped off big plays last week and might have beaten the Browns if quarterback Tyrod Taylor didn't get hurt.

Defensive coordinator Joe Woods, under fire by a vocal segment of Cleveland's demanding fan base, believes his group - with so many new players - is starting to get it together.

"It's progressing. It's the NFL so they are not going to wait for us," he said. "It really comes down to all of us just really playing together. For us as coaches, just making sure that we are game planning and putting the guys in the positions they need to be in to make plays. We are going through that process.

"It looks good at times, and at times we know there are things that we need to fix."

The Bears figure to have a little more defensive depth.

Lineman Mario Edwards Jr. is set to return from a two-game suspension for violating the league's policy against performance-enhancing substances. He had four sacks last season, his first in Chicago.

"I've been ready," Edwards said. "I've been doing what I need to do to stay ready. I'm excited to be out there."

It wasn't clear if nose tackle Eddie Goldman will play this week. He missed the first two games because of a knee injury after sitting out last season because of COVID-19 concerns.