Football and friendship: How Dillan Gibbons made a family's dream for their son come true 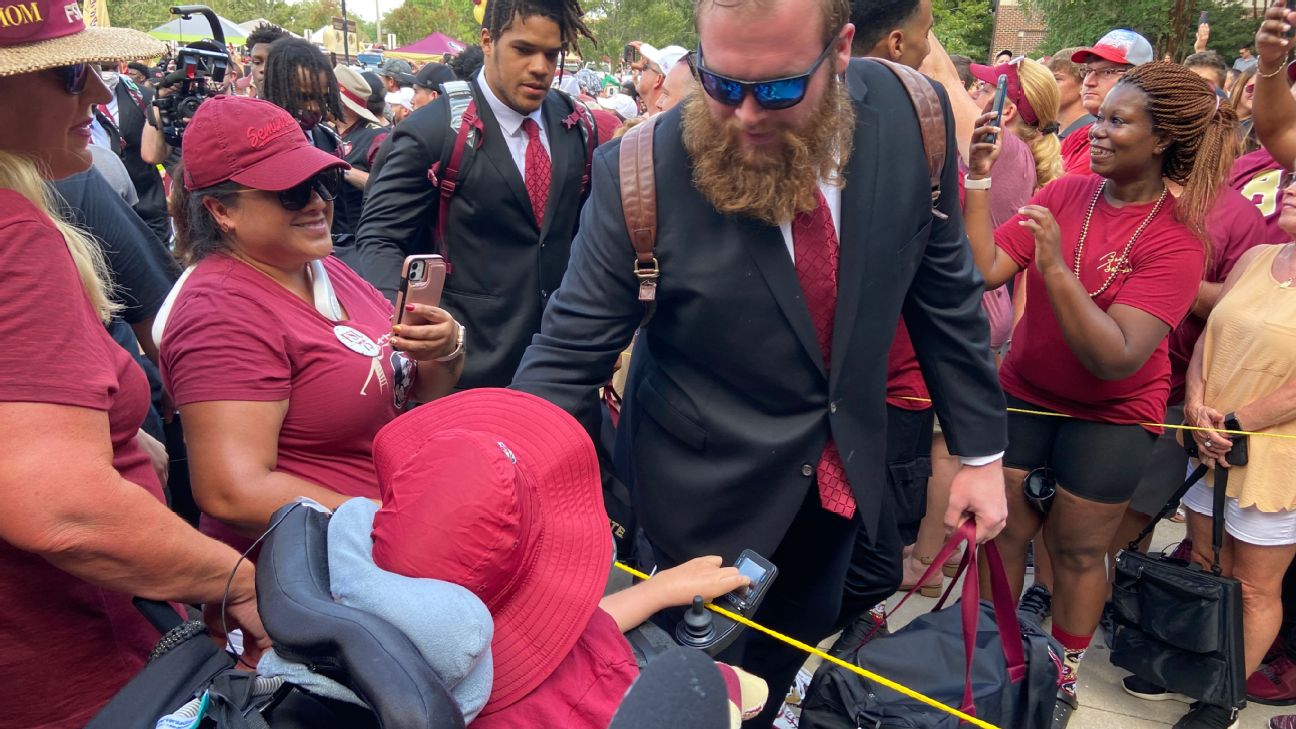 TALLAHASSEE, Fla. -- Timothy Donovan positioned his wheelchair just inside the rope line to get an unobstructed view for the Florida State pregame walk into Doak Campbell Stadium.

With temperatures in the 90s and high humidity stifling the air around him, Donovan wore a Florida State bucket hat and had a cooling fan draped around his neck for obvious reasons -- he was simply not used to this type of heat, or being outside for hours at a time, back home in Ohio.


But his friend Dillan Gibbons wanted him here, and Donovan wanted to be here, so the minor discomfort was really nothing. After 20 minutes, his iPhone rang. Gibbons called from the team bus. "Just a few more minutes," Gibbons promised Donovan.

Donovan waited patiently for the moment to arrive. Then it happened. Florida State staff and players started walking past, coach Mike Norvell first. Gibbons appeared halfway through the procession, leaned down in front of the 18-year-old and gave him a hug before disappearing into the concourse.

The Florida State offensive lineman made this day happen. After he and Donovan developed a friendship while Gibbons was playing at Notre Dame, they stayed in touch after Gibbons transferred to Florida State. Thanks to name, image and likeness legislation that took effect July 1, Gibbons launched the "Take Timothy to Tally" campaign on GoFundMe, becoming the first college player to use NIL to raise money to help someone else.

The goal was to get Donovan and his parents, Paula and Tim, to Tallahassee for the season opener on Sept. 5 against the team that brought the two of them together. The fund surpassed its initial $30,000 goal in less than 24 hours, drawing widespread attention, praise and social media buzz.

Donovan started packing his bags, counting down the days for the trip. But what started as an idea to get Donovan to a game ended up becoming something much more. Thanks to the outpouring of support from the Florida State, Tallahassee and Notre Dame communities, Gibbons gave the Donovan family a four-day extravaganza. One person after another stepped up and asked, "What more can we do?"

"I don't think there's the right words to express our gratitude," Paula Donovan said. "Even if it was $50, $500, $50,000, whatever the amount, what means the most to us is the fact that he loves Timothy so much. Not very many people give him a chance. They don't see past his disabilities or his wheelchair, so for Dillan to actually care about him, there are just no words to express how grateful we are for him."

The two met at Notre Dame's season opener in 2017. After every home game, fans wait for players to leave the stadium, hoping for an autograph or photo. As Gibbons saw fans waiting, he looked around, hoping to make eye contact with someone. The only person in the entire crowd looking directly at him was Timothy, who was sitting in his wheelchair with his parents standing next to him. Gibbons saw a boy begging for just a few minutes, so he walked over and they ended up talking for 40 minutes.

"It made me happy he saw me for me," Timothy said.

Timothy was born with VACTERL, a disorder that affects multiple body systems, including the spine, heart, windpipe, eyes and limbs. His parents had no idea something was wrong with him until he was born, and doctors told them he was not expected to survive the night. But Timothy did and, in the days that followed, underwent multiple surgeries to give him a chance at longer-term survival. In addition, Timothy was diagnosed with Charcot-Marie-Tooth, a disease that causes nerve damage in the arms and legs.

Gibbons does not remember everything they talked about, but he remembers feeling a connection. He gave Timothy his gloves, but when he got back to his room that night, he could not stop thinking about their different paths in life. Here was Gibbons, feeling sorry for himself after a rough fall camp adjusting to life as a collegiate offensive lineman, while Timothy would never have the chance to play football.

Gibbons made a promise to himself to be more grateful for what he had and stay connected with Timothy. The Donovans felt a connection, too. When they got back home, Paula sent Gibbons a direct message on Instagram, thanking him for what he had done because no player had ever stopped to say hello to Timothy in all the previous times they waited outside the stadium.


"Timothy would try to talk to people and couldn't get their attention and they would just look at him and keep walking," Paula said. "It was sometimes a little heartbreaking to see that, so when Dillan came out, it was like the stars aligned for them."

Donovan and Gibbons continued to keep in touch, texting or messaging each other on Instagram. Soon, their moms also connected, forming an instant bond that continues today. Timothy went to as many games as he could, and Gibbons gave him his gloves each time.

"That was probably my favorite moment, just seeing him smile every time," Gibbons said. "Being able to give him something from a game, including him inside my position and what I was doing, maybe giving him an outlet to live vicariously through what I was doing on the football field."

But after four years at Notre Dame, Gibbons made a decision about his own future after spring practice: He would transfer to Florida State.

Gibbons, from St. Petersburg, Florida, wanted to be closer to home and have the opportunity to start and potentially play two more seasons. During his official visit, he heard his future teammates talking about their personal branding and marketing opportunities. Gibbons asked why. They informed him that name, image and likeness legislation went into effect in Florida later that year.

Gibbons could hardly believe it. In 2019, he took a management class at Notre Dame, and the assignment was to build a company or brand. Gibbons laid out an entire plan to help cover medical costs for Donovan, but he never thought he would be able to use it while he was still in college because of NCAA rules. The NIL legislation changed everything. Gibbons went back to the outline he created and asked the Donovan family permission to set up a GoFundMe. But the goal became bigger than covering medical costs alone. Gibbons wanted to raise money to bring the family to Tallahassee.

The campaign raised $55,184 for the Donovans from donations large and small. Other types of donations came pouring in, too, including the hotel room where the Donovans stayed during their time in Tallahassee, Florida State gear from the Garnet & Gold store and meals from local restaurants, including one that served pizza slices so big Timothy could hardly believe it. The money left over after game travel will go toward Donovan's medical expenses.

"I could have never anticipated the way [the campaign] took off," Gibbons said. "I'm an offensive lineman. There's not very much glory in my position. We usually get attention when we do something wrong. It was amazing the way it took off. But it was a simple roadmap, and the thought of trying to help Timothy in any way, shape or form possible."

GoFundMe saw the campaign's success and signed Gibbons as its first sponsored athlete. Gibbons has also launched his own nonprofit, Big Man Big Heart, and his eventual goal is to spread his message to other student-athletes to carry out campaigns like his to help others on their respective campuses. GoFundMe, meanwhile, will provide marketing and communications support to Gibbons and make donations to other fundraisers he launches.

Timothy has had more than 50 operations, including one this past spring to correct a 90-degree curvature in his spine. His parents feared he would not survive the surgery, but Timothy wanted to go through with it because it would help relieve pressure on his left lung and allow him to breathe without assistance from oxygen. Initially, he did well breathing on his own and gained four inches in height, but a setback over the summer forced him back into the hospital and he needed assistance to breathe with a ventilator, which he still uses today.

"It is so hard, because he said, 'I put myself through all that pain, I made the decision of moving forward with the surgery knowing that I may not survive it, because this is not where I wanted to be, having to depend on a vent, and here I am again,'" Paula said. "It's just hard as his mom because I don't have the answers. And the more I think about, I wonder, 'What could it be? What can we do?'"


The trip kept Timothy's spirits up. The Donovans drove from Ohio to Tallahassee, taking two days to make the trip because of Timothy's medical needs. When they arrived, Gibbons was there to greet them. Though Timothy does not have a loud voice, he has a wicked sense of humor and was cracking jokes about Gibbons all night.

The day before the game, Gibbons gave the Donovans a tour of the Florida State football facility, including the locker room and coaches' offices. Timothy got to meet Norvell. "Really nice," Timothy said.

When game day arrived, the Donovans were invited to an indoor Notre Dame alumni tailgate, where the club president approached and asked whether they would like to say a few words. Paula addressed those gathered and said, "The support we've gotten from both Notre Dame and Florida State fans has been incredible. Our love for the Irish will always be there, but we're here to support Dillan today."

The Donovans wore Florida State shirts that Timothy had made, with Gibbons' name and No. 75 on the back. They then headed toward the stadium for the pregame walk. After the players filed in, the Donovans went to the field, where they were able to watch pregame warm-ups. Several former players came up to Timothy to say hello, including Roberto Aguayo and Nick O'Leary.

Gibbons was able to quickly say hello before running into the locker room to get ready for kickoff. The Donovans went to find their seats. They looked on in awe when Chief Osceola rode on Renegade to plant the flaming spear at midfield. Then, they nervously watched as Notre Dame built its lead before Florida State staged a 10-point comeback to send the game into overtime.

At that point, Timothy had drained three battery packs that operated his ventilator over the course of the day. Though he was able to breathe without it, his parents did not want to take any risks, so they decided to leave and beat traffic to get Timothy back to the hotel. They heard the final score -- Notre Dame won on a field goal in overtime -- as they trekked to their car.

The end result did not dampen their wonder at how the whole weekend unfolded. Timothy was asked whether the trip lived up to expectations. "And more," he said.

Before the Donovans left Tallahassee on Monday, Gibbons had one more surprise. As they were saying their goodbyes, Gibbons gave Timothy the gloves he wore in the game, the same way he did when they first met five seasons ago.