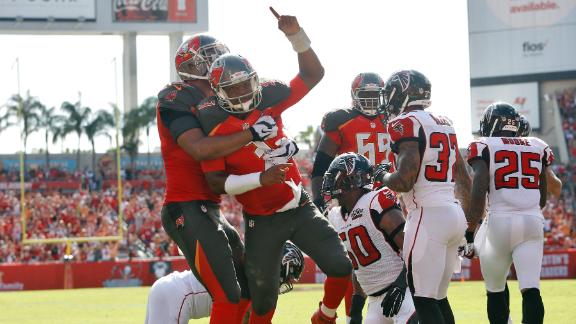 TAMPA, Fla. --Atlantawide receiver Julio Jones seemed frustrated about his role in scoring situations on a day the Falcons struggled to score touchdowns.

The Falcons went just 1-for-3 in the red zone in a 23-19 loss to the Tampa Bay Buccaneers. Jones had eight catches for 93 yards and surpassed 100 catches for the season, but he did not have a touchdown for the fourth consecutive game.

Jones was asked why fade routes or jump balls were not called his way when such scoring opportunities arose.

Offensive coordinator Kyle Shanahan, the target of much outside scrutiny, has stood by his play calling. Defenses have schemed to take Jones out of the action. But there have been times when one would figure Jones would get a look rather than guys such as Terron Ward(last week) or rookie Justin Hardy(in San Francisco). Then again, Shanahan's gamble to go to seldom-used Nick Williams paid off Sunday with a 6-yard touchdown from Matt Ryan off play-action across the formation.

Regardless, the Falcons are much better when Jones reaches the end zone. They are 3-1 in games in which Jones scored a touchdown.

On Sunday, Jones was targeted four times in the red zone, with two catches. He was not targeted in five goal-to-go situations.

Jones was the target on Ryan's interception with 1 minute, 39 seconds remaining in regulation, which sealed the win for the Buccaneers. Linebacker Lavonte David dropped deep to pick off a pass Ryan said he should not have thrown.

Falcons coach Dan Quinn believes the Falcons, at 6-6, can make the playoffs. But they won't if they don't score points.

Winston, Bucs hand Falcons fifth-straight loss
Jameis Winston tosses one touchdown and runs in another in the Buccaneers' 23-19 win over the Falcons.