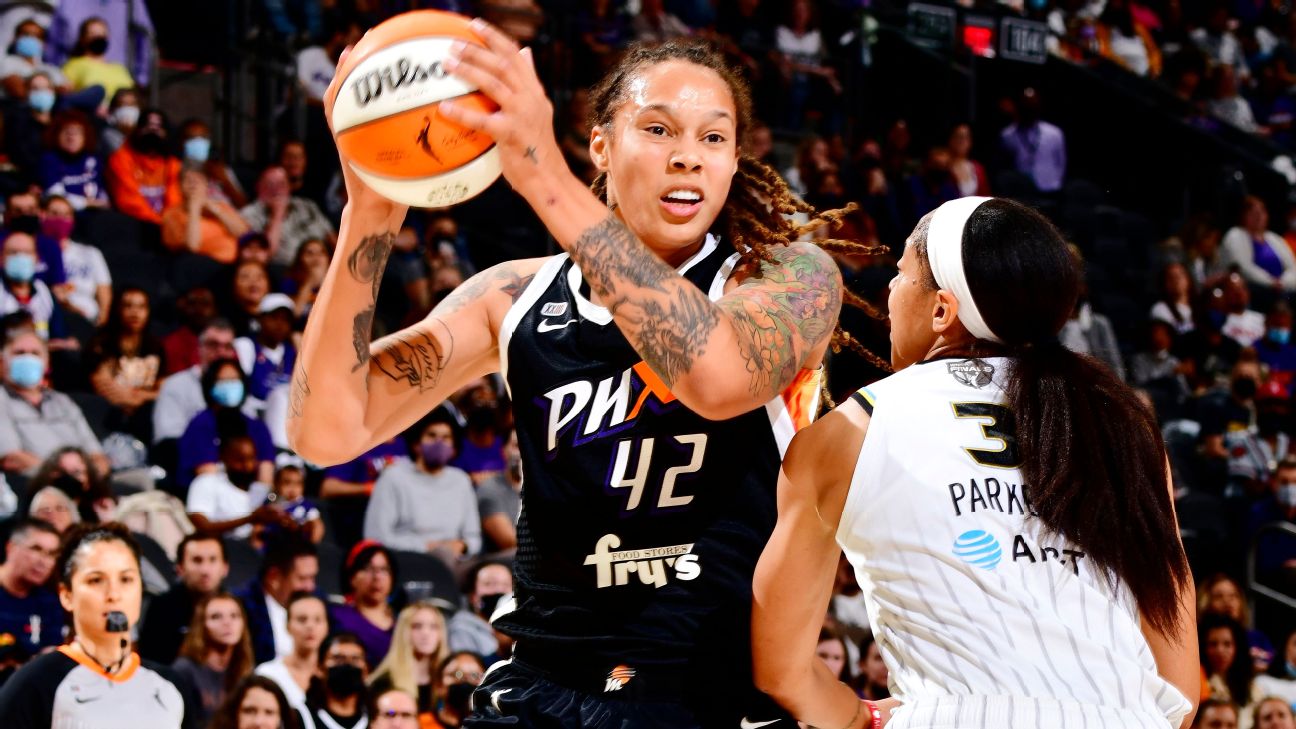 PHOENIX -- Despite tying her playoff career high with 29 points and throwing down the first dunk in WNBA Finals history, Phoenix Mercury center Brittney Griner's most important play in Wednesday's Game 2 win over the Chicago Sky came on defense late in overtime.

She blocked a layup by Chicago's Kahleah Copper with 1:34 left and the score tied at 86. That led to a 3-pointer by Phoenix's Diana Taurasi to put the Mercury ahead for good in their 91-86 win that evened the series at 1-1 as it heads to Chicago for Game 3.


Whenever the Mercury needed a play down the stretch, Griner made it happen.

She scored seven of Phoenix's final 12 points in regulation, and even though she didn't score in overtime, she had three rebounds and that crucial block.

"It's huge," Taurasi said. "We know who our bread and butter is. BG is just playing at a different level right now, and there's really nothing anyone can do. We knew coming into this game it was going to be a big focus: Got to get BG down low early and often.

"She sustained us for most of the game when offensively we didn't really have a rhythm, and every time I looked up, she was making big basket after big basket when we weren't playing well. That's just what BG does, though. I think we take for granted sometimes how amazing she is."

Griner was on from the jump -- quite literally.

She scored the Mercury's first 10 points, which included the first dunk in Finals history with 5:35 left in the first quarter. It was Griner's 24th career dunk and second in the postseason. Mercury coach Sandy Brondello didn't want Griner to be fed on every play; however, she would have liked Griner to be involved more at certain stages of the game, resetting in the post rather than setting screens.

Good things happened when Griner touched the ball Wednesday, like the Mercury going 17-of-29 on field goals, according to ESPN Stats & Information research.

"Obviously, she's a dominant player," Brondello said. "We don't want to go [to her] all the time because we have to involve everyone else, but she has to be -- she's a playmaker, as well, not just a scorer."

Griner got help from the rest of the Mercury's Big Three -- Taurasi and Skylar Diggins-Smith -- as they combined for 27 of Phoenix's 34 points in the fourth quarter and overtime.

Taurasi finished with 20 points despite entering the fourth quarter with just six. She started overtime with a four-point play and finished the extra time with eight -- outscoring Chicago's seven total points by herself.

"That's the GOAT right there," Griner said. "We know what Dee can bring, doesn't matter how she starts the game or whatever. You know when the time is going down, when it's crunch time, we have all the faith in the world that Dee is going to make those shots and make big plays for us. She does it year in, year out."


Together, Griner and Taurasi scored 23 points in the fourth quarter and overtime to match the Sky's total as a team during that stretch.

Diggins-Smith added 13 points to go with 12 assists and seven rebounds for the game.

The Sky were paced by their starting five, four of whom scored in double figures. Courtney Vandersloot led Chicago with 20 points and 14 assists. Guard Allie Quigley had 19 points, Copper finished with 15 and Candace Parker added 13.

The atmosphere inside the Footprint Center was so electric that Diggins-Smith said she couldn't hear.

That led to one of the more confusing plays of the night.

Taurasi, who had three steals all season, made her fourth steal with 34 seconds left. She ended up tripping out of bounds, but not before Brondello called a timeout, allowing Phoenix to keep the ball and score a layup on the next play to seal the win. However, only the players right next to the official who blew the whistle knew a timeout was called. The rest of the players kept going.

"Great effort," Brondello said of Taurasi's steal. "But we joked a little bit about her, the biggest play of the day was the steal. Diana doesn't steal very often, so that was a big play."

When Griner was able to work in the post, she was "comfortable," Vandersloot said. Half of Griner's 44 touches in the half court came in the paint.

"We always try to make things difficult as we can for her, mixing up reads, but when she gets going like that -- she had 10 quick points early -- but we're OK with that," Vandersloot said. "We know she's a great player for a reason. We've just got to try and throw something else at her."

Not much worked Wednesday.


Griner scored on three different primary defenders and was 8-for-14 when defended by Stefanie Dolson and Azura Stevens. Overall, she was 12-of-19 from the field, and had nine rebounds and two blocks. Griner was also 5-for-5 from the free-throw line, which Chicago coach James Wade pointed out was more free throws than the Sky attempted as a team.

"Call it what you will. I've never seen that ratio in a league game before. You score that many points in the paint, that means you're attacking the basket, and you shoot four free throws."

Griner came into Game 2 wanting to be better on defense, and that worked, as well. She held Chicago to 5-for-13 from the field as a primary defender, despite being brought out of the paint by the Sky so she couldn't be a shot blocker, Brondello said. But Griner's goal was simple Wednesday: "Don't suck on defense like I did first game."

"That was honestly my biggest thing, just not hugging my man," Griner said. "I hugged my man way too much in that first game. I hugged him way too much. When I'm in the paint and they see me and I'm there, that's when I can help my team. When I'm out hugging on the perimeter and not in the paint, I'm just dead weight out there. So, that was a big thing.

"And then just being aggressive from the jump. If it goes in, it goes in, if it doesn't, it doesn't. My teammates have all the faith and always talking to me. That was my thing, just go to the rim, get it, but if I don't, I don't."

With Game 3 headed to Wintrust Arena in Chicago, Parker, a Chicago-area native, said she and her teammates will have "a lot" of friends and family in the stands. The arena is sold out for the franchise's first Finals home game.

Parker was skeptical when she first heard the game was sold out so she went onto the Wintrust Arena website but no tickets were available. Then she went to Ticketmaster and saw the resale value of tickets.

To Parker, who's in her 14th season, seeing for herself that the game was actually sold out -- "because a lot of times it's sold out but you can still get tickets" -- was proof that the WNBA is growing. 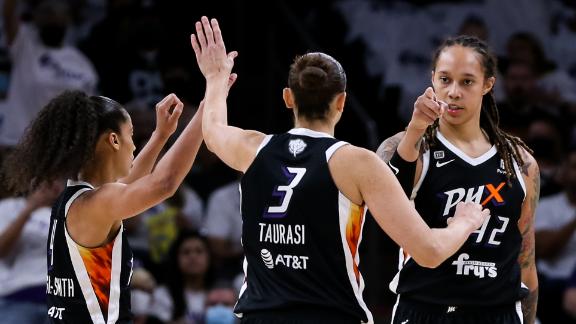