Source: Orioles' 7-year offer to Chris Davis off the table 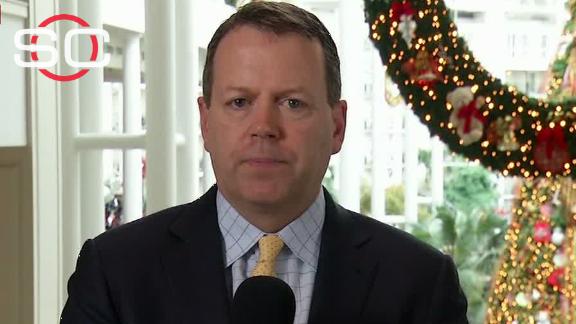 According to a source, the Orioles didn't raise the offer -- "not a nickel" -- since Wednesday, before deciding to pull it back.

It's possible the talks will resume where they last left off -- the two sides spoke as recently as Wednesday -- but one source said the Orioles are going about the business of remaking the team for 2016, whether it includes Davis or not, and pursuing other players.

"There's a lot of rumors out there, lot of interest," Orioles general manager Dan Duquette said Thursday. "But now's the time of the year to buckle down and for people to make choices, what they're going to do with their teams and for players to choose what teams they're going to play for.

"I believe we're making a little progress on figuring out how we're going to put our team together this year. I always like to try to get the core of the team before Christmas, but it doesn't always work that way. Sometimes you need patience, and sometimes you've got to move. We're moving on the things we can move on, and I can see our team being pretty good next year."

Davis led the majors with 47 home runs in 2015, and he's hit 159 homers over the past four seasons -- more than any player on the free-agent market.

He was second in the American League with 117 RBIs in 2015, but he also led the majors with 208 strikeouts. Despite being prone to slumps at the plate, Davis has been valued for his prodigious power. A lefty slugger, he is the only player in the past five seasons to hit at least 50 home runs in a season, blasting 53 for the Orioles in 2013.

Davis, who turns 30 in March, has also played at third base and right field since arriving in Baltimore before the 2011 season.