Back at practice with Detroit Lions, Jared Goff 'trending' toward playing on Thanksgiving Day 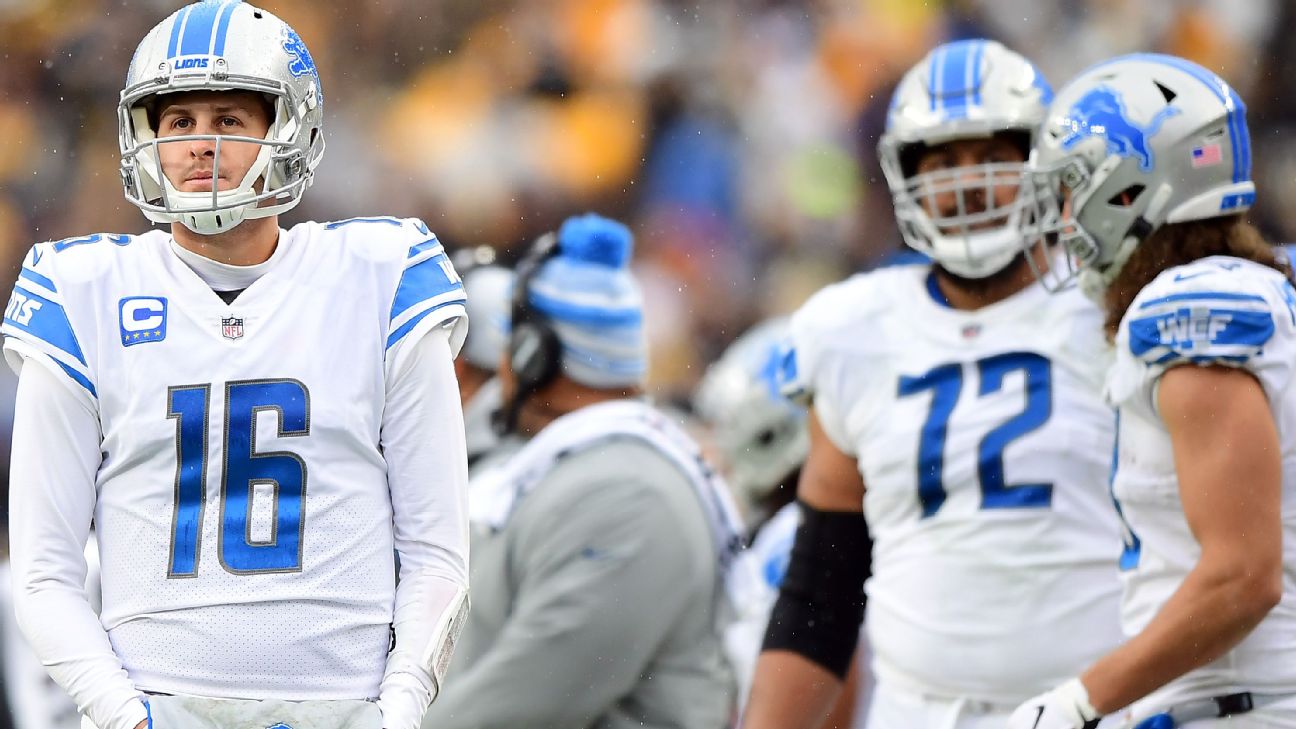 ALLEN PARK, Mich. -- The Detroit Lions enter Thanksgiving winless for the third time in franchise history, but they could get a boost under center this week. Quarterback Jared Goff is "leaning" toward a return for the holiday game, according to coach Dan Campbell.


"I would say there's a 60% chance of it being 50-50," Campbell said jokingly about Goff leading up to the divisional game vs. the Chicago Bears.

In Goff's absence, the Lions plugged in Tim Boyle, who struggled in his first NFL start. He totaled 77 passing yards with two interceptions, completing 15 of 23 passes for a 34.1 passer rating.

Goff missed all of last week's practices while managing the injury, which he suffered during Detroit's 16-16 overtime tie with the Pittsburgh Steelers at Heinz Field in Week 10.

However, he did return to practice Monday in a limited role, then participated again Tuesday. Still, the Lions are closely monitoring the situation.


"He's tough," Campbell said of Goff. "And honestly, that's part of my concern is because I know how tough he is and he tells you he's being truthful, but I know how bad he wants to play and he's been through a lot, played through a lot, and I appreciate that about him, but I do want to make sure he's definitely ready to go, and I do think it's trending that way."

Although he says he feels better every day, Goff categorized himself as being a "game-day decision." He described the pain management as being like a delicate dance of not pushing it too far. However, competing on the Thanksgiving stage and embracing the franchise's history is also motivating him to return since he has never played on the holiday.

"I haven't played in it, but I've heard all about it. I knew this was coming all year and excited about it," Goff said. "It's a tradition that has been amongst this team for a long time, and hopefully can make my mark in this game this year."
Report a correction or typo
Related topics:
sportsespnnewsdetroit lionsnflchicago bearsjared goff
Copyright © 2022 ESPN Internet Ventures. All rights reserved.
TOP STORIES
Hairstylist killed while looking for parking at work in Chicago Lawn
5G launch could wreak havoc on airplanes, airline CEOs warn
Cook County brings back 3 mass COVID vaccination sites
Police search for hit-and-run driver who killed mother of 3
Tonga volcano eruption shock waves detected in Chicago
Rapper Vic Mensa arrested at DC airport for drug possession
Chicago Weather: Cloudy but milder Tuesday
Show More
Chicago's south suburbs to get new area code Friday
Woman killed after being pushed in front of NYC subway train
Aurora Mayor Richard Irvin announces run for IL governor
What is the Black church's role in today's social justice movement
Chicago sports broadcaster Les Grobstein dies at 69
More TOP STORIES News