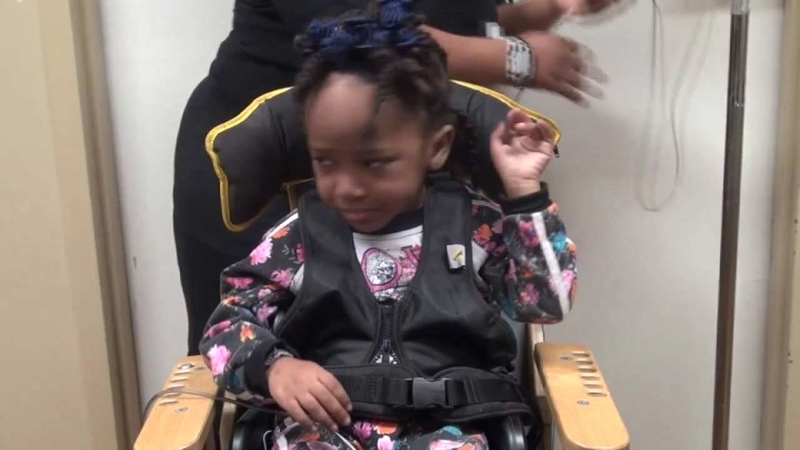 HOUSTON -- A 4-year-old girl went to a dentist to get a tooth pulled, and she's now in a hospital with severe brain damage. Her family is living a nightmare. They want to know how what should have been a simple procedure went so wrong.

Two months ago, Nevaeh begged her mom to go to Chuck e Cheese. Now she's at a rehab hospital. The four-year-old can't talk, walk, eat or even see.

Her father Derrick Hall said, "It's heartbreaking. It really is like...I never in a million years would have thought something like this would happen. "

Nevaeh's family says she suffered severe brain damage after being sedated at the dentist. She was supposed to have a tooth pulled.

We discovered through state records that Nevaeh's dentist, Dr. Bethaniel Jefferson, who worked at an office on Kuykendahl Road, was suspended from practicing by the Texas Board of Dental Examiners after the incident.

They cited that Dr. Jefferson did not call for help immediately after Nevaeh started having seizures and attempted to her treat with medication, instead of calling 911.

Hall said, "You could have easily said, 'What's going on, this is what possibly could be going on.' You know, nothing. Nothing. "

Her mother Courissa Clark said, "At this point there's nothing else that can be done to get that same four year old back. It hurts to see her like that. "

We also uncovered the dentist had a history of problems with patients.

In 2005, records say she didn't keep proper track of a patient's blood pressure and pulse.

"It's like a bad dream. It really is. Just that quick, " Hall said. "It's something that can't be changed. At all."

We reached out to Dr. Jefferson at both her office and her home and left messages. None have been returned.