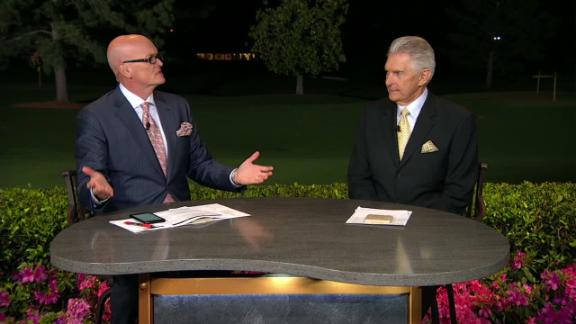 Despite his Masters meltdown, Jordan Spieth is the U.S. Open favorite.

The Westgate Las Vegas SuperBook installed Spieth as the favorite at 7-1 to win the U.S. Open, which tees off in June at Oakmont Country Club. Spieth is the defending U.S. Open champion.

Rory McIlroy and Jason Day are each 8-1 and are the only other golfers to have single-digit odds.

When Spieth headed to the back nine Sunday with a 5-shot lead, he was a giant minus-2,500 favorite at the SuperBook to win his second straight green jacket. But he followed back-to-back bogeys with a quadruple bogey on No. 12 and finished in a tie for second behind championDanny Willett. More money was bet on Spieth to win the Masters than any other golfer at the SuperBook.

Willett opened at 30-1 to win the U.S. Open. The first-time major winner was a 150-1 long shot to win the Masters to start the year and entered the tournament at 50-1. When he was down five to Spieth on the back nine, Willett was a 14-1 underdog in live wagering at William Hill's sportsbook in the United Kingdom.

The SuperBook took 62 bets on Willett to win the Masters, and William Hill's Nevada sportsbook took a $100 bet on the Brit in February at 150-1 odds.

Dustin Johnson, who finished in a tie for fourth at the Masters, opened at 15-1 for the U.S. Open, followed by Rickie Fowler, Adam Scott and Justin Rose, each at 20-1. Phil Mickelson is 30-1, and Tiger Woods is listed at 100-1.

Spieth will struggle with this for a long time
Scott Van Pelt and Andy North evaluate how Jordan Spieth will recover from his collapse at The Masters, but believe he handled it like a pro. They also talk about what the win will do for Danny Willett's career.
Related topics:
sportsespngolfnews chalkoddsdanny willettjordan spiethus opennews uk golf
Copyright © 2020 ESPN Internet Ventures. All rights reserved.
More Videos
From CNN Newsource affiliates
TOP STORIES