Ruben Ochoa Cruz, of Joliet, is facing federal arson charges in connection with the blaze that caused around $70 million in damages last week. Investigators said the 20-year-old forklift operator was angry with his bosses.

"He had just had a heated argument with them over vacation time. They were going to cut his vacation time because of days missed at work," Chicago ATF Special Agent Tom Ahern said.

ATF investigators said scanning equipment put Cruz in the area where the fire started at the time it began, and he allegedly confessed to igniting a packing slip.

"He said that he lit a piece of paper," Ahern said. "And that was his way of relieving the tension and the pressure of the argument that he just had."

The fire quickly spread at the RoomPlace's main distribution center in the 2500-block of Internationale Parkway. Firefighters said more than 700,000 square feet went up in flames, and more than 100 firefighters from 30 departments were called in to help.

Ken LeFlore was one of 65 employees who was working at the time of the fire. They were all able to escape unharmed, but the building was reduced to ash.

Officials for The RoomPlace responded to the charges in a written statement: "We are deeply disturbed at the news one of our employees has been charged in connection with the fire that destroyed our main distribution center April 21st. We continue to cooperate with federal authorities as they search for more details around a cause and potential motive. In the meantime, we remain focused on rebuilding our warehouse and delivery infrastructure and supporting those employees displaced by the fire."

Cruz is in the custody of U.S. Marshals and is being held at the Metropolitan Correctional Center. If convicted on federal arson charges, he faces five to 20 years in prison. He could also face state charges.

Cruz is due in federal court on May 4. 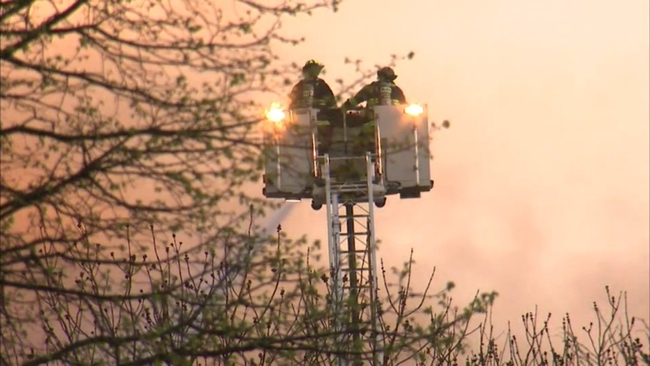