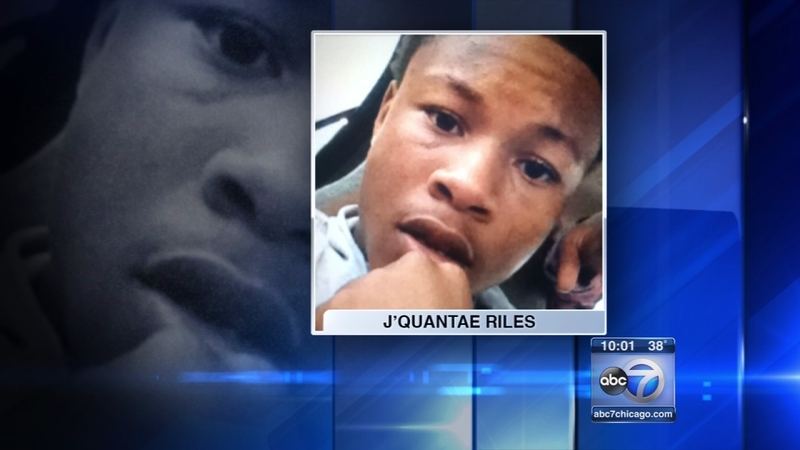 CHICAGO (WLS) -- Community members came together Sunday night to mourn a teenager shot and killed while walking with his friends in the city's Englewood neighborhood.

J'Quantae Riles is the second 14-year-old to die as a result of gun violence in Chicago in the last week, and while police continue to search for his killer, family and friends gathered for vigil Sunday night for the boy who moved back to Chicago just 10 days ago.

The 14-year-old boy's name is spelled out in candles on the Englewood sidewalk Sunday night where he was gunned down Saturday night, shot in the back, near 59th and Oakley as he walked home from a local barbershop with friends.

"Whoever knows who these kids were that were shooting at my grandchild, I want them to speak up," said Carolyn Marshall. "I want them caught and go to jail because my grandson did nothing to nobody."

Police say the shooting was gang-related and believe J'Quantae may have had gang ties. His friends deny it. In an interview Sunday, his mother, Franika Marshall, who is six months pregnant with twins, told ABC7 the family moved back from Virginia just ten days ago. She had left Chicago precisely to get away from the violence, but things just didn't work out.

Marshall says Saturday night she helped her son with his homework and then walked him to the barbershop. She thought he would be okay walking home because others were with him. Instead, just after 9:30 p.m. came a knock on the door. J'Quantae was dead.

"He was a friendly kid," Marshall said. "He always wanted to fit in, just be cool with everybody."

Three others were said to have been with Riles at the time of the shooting. Police are not sure who the actual target was. No one is in custody as detectives continue to investigate.

This is the second shooting of a 14-year-old boy in the South Side in the past three days. On Friday, three teens were injured in a shooting as classes ended for the day at Excel Southwest High School in the city's Southwest Side. Two 17-year-olds and a 15-year-old boy were shot. No arrests have been made in that case.

On Thursday, another 14-year-old - an innocent bystander - was critically injured after being shot in the chest outside of Baker College Prep while on the basketball court with other students. After he was shot, the teen ran into the building to try and get help. A 16-year-old boy has been arrested in connection with the shooting.