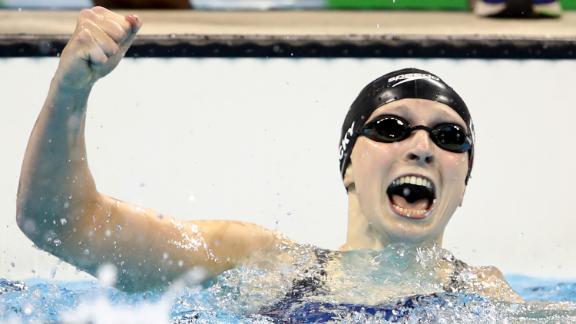 RIO DE JANEIRO -- Katie Ledecky was racing nothing but the clock.

It was no contest.

The unassuming teenager from suburban Washington gave the United States its first swimming gold medal of the Rio Olympics on Sunday night, crushing her own world record in the women's 400-meter freestyle.

The result was totally expected. Ledecky has dominated the longer freestyle events since winning gold in the 800 free at the London Olympics as a 15-year-old.

The only drama was whether she'd take the world record even lower.

Her powerful stroke quickly made that a moot point, too.

Ledecky kicked off the first wall with a lead of nearly a body length and steadily pulled away from the overmatched field -- as well as the world-record line superimposed on the video screen.

Her arms churning effortlessly through the water, Ledecky touched nearly five seconds ahead of her closest pursuer and quickly whipped around to look at the scoreboard.

When Ledecky saw the time -- 3 minutes, 56.46 seconds -- she let out an uncharacteristic scream and shook her right fist. She crushed the mark of 3:58.37 that she set nearly two years ago on the Gold Coast of Australia, and had been chasing ever since.

"I was pumped," Ledecky said. "That's what I wanted and I had been so close to breaking that all year, the past two years. I knew I was due for a breakthrough."

It was a night of world records at the Olympic Aquatics Center. Britain's Adam Peaty set his second mark in as many nights in the 100 breaststroke, while Sarah Sjostrom of Sweden eclipsed her own mark in the 100 butterfly.

Still to come: the men's 4x100-meter freestyle relay, featuring the most decorated athlete in Olympic history. Michael Phelps was picked to swim for the United States, giving him a chance to add to his already staggering medal haul of 18 golds and 22 medals overall.

After the powerful U.S. team was shut out Saturday and through the first two events Sunday, Ledecky got the Americans on the top step of the podium.

She's just getting warmed up.

Ledecky, who added gold to the silver she won in the women's 4x100 free relay, is also favored in two other individual events: the 200 and 800 free. In addition, she could pick up another gold in the 4x200 free relay.

Peaty was nearly as dominant in the breaststroke, winning with a time of 57.13 that shattered the mark of 57.55 he set in the preliminaries.

Peaty cruised away from Cameron van der Burgh of South Africa, the defending Olympic champion who took silver this time in 58.69. The bronze went to Cody Miller of the United States, whose time of 58.87 held off teammate Kevin Cordes.

The crowd went into frenzy at the sight of two Brazilians in the final. But Joao Gomes finished fifth and Felipe Franca was seventh.

Sjostrom led right from the start of the fly and touched in 55.48, knocking off the mark of 55.64 she established at last year's world championships. She sat on the edge of the deck, pumping her arms in the air, and then appeared to be overcome by tears as she climbed to her feet.

This was her first Olympic medal. Sjostrom finished fourth in the 100 fly at the London Games four years ago, missing out on the bronze by just 23-hundredths of a second.

Penny Oleksiak of Canada took the silver in 56.46, edging out defending Olympic champion Dana Vollmer. The American, who had her first child 17 months ago, settled for the bronze in 56.63.