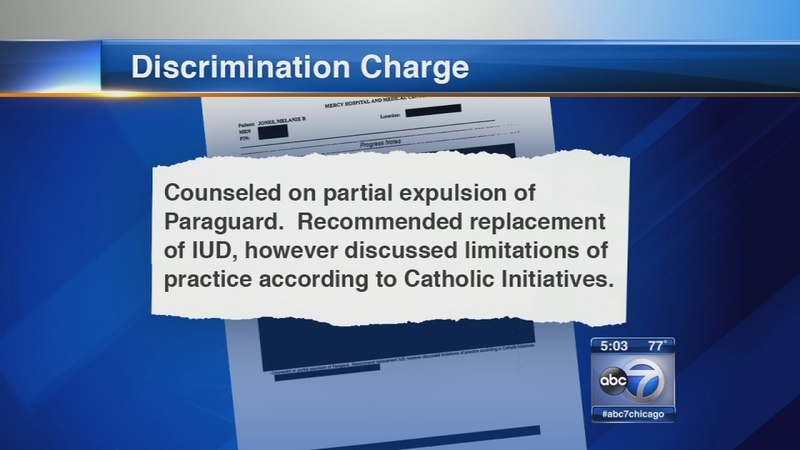 CHICAGO (WLS) -- A young woman has filed a discrimination claim against a Chicago hospital claiming a doctor affiliated with the hospital refused her treatment for religious reasons.

Mercy Hospital was originally started by the Sisters of Mercy. This institution and others are also guided by the ethical and religious directives from the U.S. Conference of Catholic Bishops.

After a recent incident involving one of the doctors at Mercy, they are hoping to better educate doctors system-wide about those religious directives.

In an exclusive interview, 28-year-old Melanie Jones said she is healing, but also shared that the emotional scars remain.

"I felt sad. I felt judged. I felt like a system that was put in place to help me tossed me aside and didn't care what happened to me," Jones said.

Jones filed a charge of discrimination against Mercy Hospital alleges she was denied care because she was using a birth control device.

"I felt like I was being punished for having an IUD. And that they were judging me and telling me, because you did this we are not going to help you," Jones said.

Jones, a non-profit independent contractor, said she fell just before New Year's Eve. After days of pain and bleeding she went to see a gynecologist in her network fearing her Intrauterine Device, or IUD, had dislodged. Jones said she saw a doctor with Mercy Hospital in a South Loop office who refused to remove the IUD.

Jones provided this part of her medical record, in which it reads: "Counseled on partial expulsion of Paraguard. Recommended replacement of IUD, however discussed limitations of practice according to Catholic Initiatives."

"When we go to the doctor, we think that we're going there to get the best possible care for ourselves. We think we're there for health care, and not to have someone else's religious beliefs imposed on us," said Lorie Chaiten, an ACLU Illinois attorney.

Jones said she was eventually able to have the IUD removed by a doctor in another non-religious affiliated network, but not after the device cause internal lacerations.

"I believe a hospital and a doctor's office is a place for healing and not for judgment," Jones said.

Mercy's Director of Missions said that in Jones' case, the doctor did not consult their ethical committee. He also said that in this case, removing the device would not have violated the system's directives.