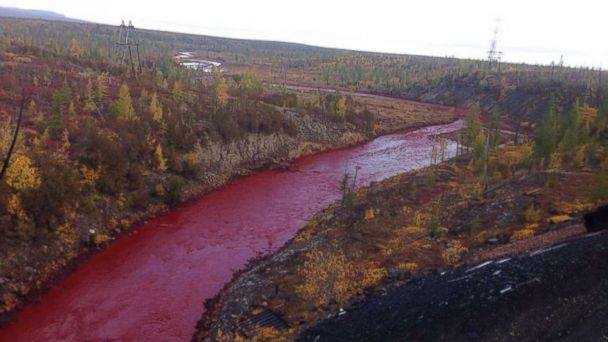 Startled residents of a Russian city inside the Arctic Circle have been publishing photos of a local river that has mysteriously turned blood red.

Photos published on Russian social media appear to the show the river Daldykan near the city of Norilsk flowing a vivid burgundy color. Authorities have so far declined to give a reason for the river's unusual appearance, but local people have quickly begun linking it to a giant metals factory located upstream.

Norilsk is known as one of the most polluted cities on earth, built around factories mostly belonging to the vast metals company, Norilsk Nikel. Some Norilsk residents wrote in a local social media group that they believed the river's biblical shade was linked to runoff from a nearby smelting plant.

Some suggested the color was being produced by wastewater mixed with mineral ore leaking from the factory into the river.

A user named Evgeny Belikov, who claimed to have previously worked at the factory, said that plant workers referred to a reservoir connected to the factory as the "red sea" on account of its color, produced by the ore.

Other users posted older photos seeming to show the reservoir a similar color, in an area that had large pipes running into it.

"In winter, the snow's also red," Belikov wrote on the social media group. "On the one hand, it's beautiful, but on the other it's chemical."