WLS
By Diane Pathieu and John Garcia
CHICAGO (WLS) -- It's not a new problem, but the city is employing a new weapon to combat Chicago's rat population - dry ice.

The city has tried for years to get rid of the rodents, while residents either got used them running around or waged their own war against the varmints.

"Totally used to it. I expect that's just part of the urban environment and that's what happens. You get rats," said Mary Pat Reilly, a Chicagoan.

But in a Lakeview dumpster it's man versus rat in a battle to the death. James Skipper's wife said he is obsessed with fighting off the invading army. He checks his traps every night and every morning, but nothing seems to work.

Skipper isn't the only Chicagoan with rodent rage. City data shows 247 people called 311 with rat complaints on Monday alone. There have been 27,000 complaints through August of 2016. Crews have increased baiting but rats keep breeding and complaints keep coming.

But after a recent national newspaper interview, Chicago Department of Streets and Sanitation Commissioner Charles Williams learned about a new program taking place in Boston that was actually working.

"After that interview we immediately looked into it, we saw they were having success with it in Boston. New York has started working with it. We began working with it here in Chicago," Williams said.

Last month, the city launched a pilot program where crews put dry ice directly into a rodent burrow and covered the hole. As dry ice melts, it turns into carbon dioxide, suffocating the rats. Dry ice can be deadly to small animals at high concentrations.

"Quite frankly, I like the dry ice thing. Get them in the nest during the day and hopefully you can take them out before they wake up in the evening," Skipper said.

So far, so good. Preliminary results show 60 percent of Chicago's rodents have been reduced using the dry ice. The dry ice is not only better for the environment than poison, but also cheaper.

City officials said the number of complaint calls about rats to the 311 center has increased 37 percent in the last year. In response, the city has put out 41 percent more bait.

"These creatures are very intelligent, they're very hardy and they breed like crazy," Ald. Brian Hopkins (2nd Ward) said.

This is the latest step to help control the rodent problem in Chicago. Back in April, more crews were added to the Bureau of Rodent Control, bringing the total to 28.

This summer, there were more than 6,700 complaints about rats. Chicago was even named one of the "rattiest" cities in America by an extermination firm.

Before now, the city's strategy to deal with the rats has included warning residents not to leave food or dog waste out in the open, where rats can feed on it. Streets and sanitation crews also put out poison to try to kill the rats.

"It will probably end up being just another tool in our tool box that we can use in certain areas," Streets and Sanitation Cmsr. Charles Williams said.

Stephen Spargur, who also lives in Chicago, is familiar with the dry ice method. He, too, had a similar rat problem.

"I think it will work. Just from my own experience of working with the dry ice years ago, it will suffocate the rats. The only issue will be dead rats in their burrows," Spargur said.
Related topics:
chicagorats
Copyright © 2020 WLS-TV. All Rights Reserved.
RELATED 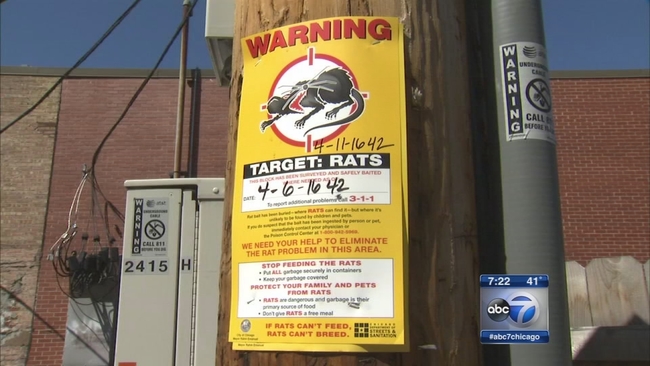