Explosion blows hole in roof of South Side elementary school 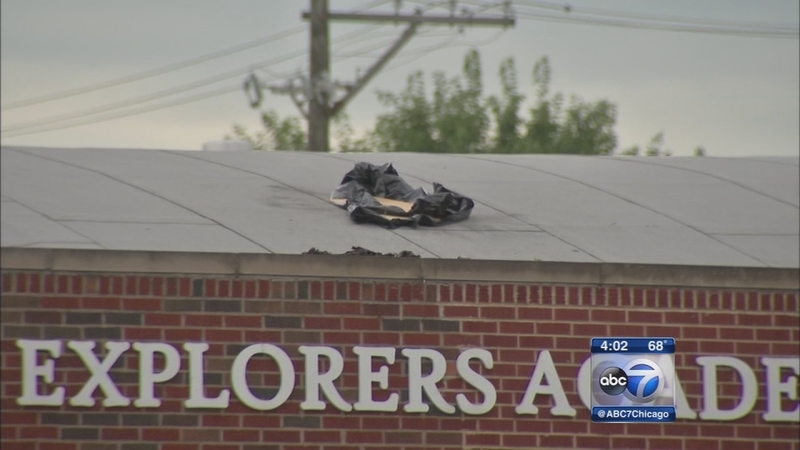 CHICAGO (WLS) -- About 200 students were evacuated from an annex building at a South Side elementary school Wednesday morning after damage from an explosion was discovered.

The explosion blew a three-foot-wide hole on the roof of an annex to Columbia Explorers Academy near 46th and S. Kedzie in Brighton Park.

Neighbors told police they heard some sort of blast around 10 p.m. Tuesday night. As kids arrived at school Wednesday morning, the hole was discovered and parents rushed in.

"What woke me up was the helicopters flying all over the place. Something has to be going on, so my first instinct was to come to my daughter's school. And sure enough, all the red and yellow tape was around here," parent Jason Fabian said.

The Chicago Police Bomb and Arson Unit and agents from the Bureau of Alcohol, Tobacco, Firearms and Explosives were called to the scene.

After confirming there was residue from an explosion, school officials quickly moved the 200 kids in the building to the main campus. ATF and FBI investigators said late Wednesday they have confirmed the blast was caused by some sort of fireworks.

"It's a surprise because it is a little school but it's been very nice," parent Anna Cahue.

Late Wednesday afternoon, CPS sent out a robocall alerting parents to an "incident" but that all children were safe.

"They kept telling us to not go outside for not at all," said Sergio Villalobos, 12.

It's not clear how long the annex will be closed, but the school's main campus remains open.

The blast hole in the north side of the annex bldg at Columbia Explorers school - 200 kids safe in main bldg pic.twitter.com/RdW2E73TbV