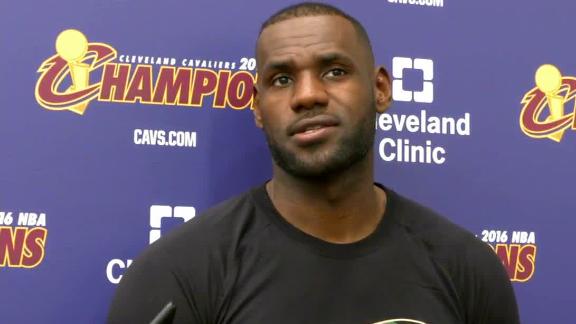 INDEPENDENCE, Ohio -- The King is already contemplating his reign coming to a close.

LeBron James, on the opening day of training camp for his 14th NBA season, said that the retirements of Kobe Bryant, Tim Duncan and most recently Kevin Garnett have caused him to think about when he and his contemporaries will play their final games.

"It feels like our era is next," James said Tuesday. "That's what it feels like. Me, [Dwyane] Wade, [Carmelo Anthony], [Chris] Bosh. We're next. We're on deck. We're the next group behind those guys. I mean seriously, if you look at it, we're the next group. So that's one of the first things that I thought about, like, once Dirk [Nowitzki], and Vince [Carter], and Paul Pierce decide to go, we're next. You just don't take it for granted. Every time we come out here, we talk to you guys, step out on the floor, we're going to play this game, we love it, but we're on deck."

James signed a three-year extension this summer that will keep him in the league at least through the 2017-18 season should he play it out.

Pierce announced Monday that 2016-17 would be his 19th and final season. He is one of three remaining members of the 1998 draft class still active, along with Nowitzki and Carter.

James came into the league in 2003 along with Anthony, Wade and Bosh. They have already outlasted several other notable names from their draft class, including Darko Milicic (selected No. 2) and T.J. Ford (No. 8).

A visiting reporter asked James if he thought he could add to his three championships and amass as many as six, seven or eight rings before he is finished playing -- as he once suggested during a pep rally when he joined the Miami Heat.

"Nah, I don't do that anymore," James said. "Last time I did that, everyone wanted to make a headline about ranking off how many championships I was going to win. For me, it's just about maximizing each season, going out and playing my game, leading this team and at the end of the season see what happens, so nothing is promised and we just have to earn our way once again for another season."

The reporter followed up by asking the 31-year-old James if he was satisfied with his place in league history already.

"What? I'm not answering that," James replied. "You even asking me a question like that is crazy."

James was later asked if he considers his very best behind him and shot back, "No. That's insulting." Another reporter followed up on James' baseball analogy and asked if that meant he was simply taking a long walk to the plate from the batter's circle.

"I said we was on deck," James quipped, "not that I was a DH [designated hitter]."

On a serious note, retirement could come sooner for Bosh than the rest of his fellow heralded '03 draftees. Miami president Pat Riley said Monday that Bosh's Heat career is "probably over" after a blood clotting condition caused the two-time champion to fail a team physical.

"I stand behind my brother Chris, and the most important thing is his health," James said. "So whatever decision he wants to do, and go forward, I'm all for it. I'll support him in any way, shape or facet. Obviously we all know it's probably a difficult situation for him, and it's pretty surprised a little bit to hear that the team is just done with him, and then to come out and say it. It's not like I've been there, to know exactly what's going on in the interior. So I've only seen it from the exterior like the rest of us. So, um, I just wish the best for him and he has my support."