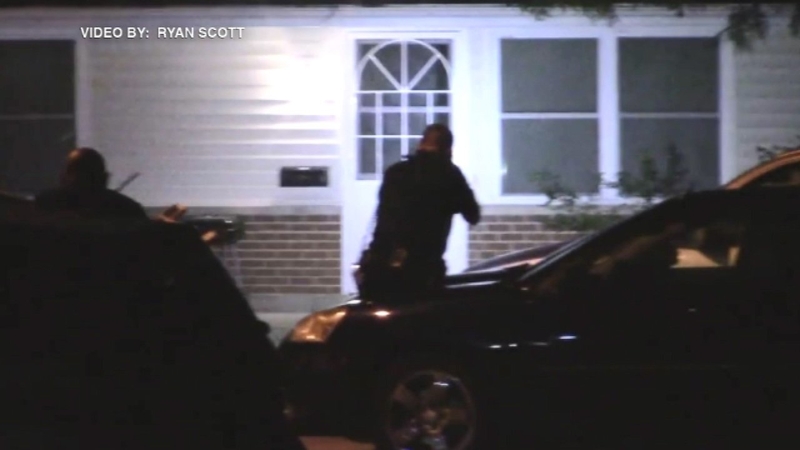 SYCAMORE, Ill. (WLS) -- It was a rude awakening for a family in Sycamore, Ill. A mom, dad and their three children marched out the front door by police who thought they were suspects in a murder that had occurred minutes earlier and miles away.

It was a mistake by Illinois State Police, DeKalb sheriff's deputies and the Sycamore Police Department.

Police had the place surrounded, their rifles aimed at the home on a quiet street in Sycamore a week ago. Inside the house, a family was tucked asleep in their beds.

"Then there were like flashlights going through the window, they kept flashing it off and on," Eric Nabors, a 10-year-old, said.

Briana Browning, 13, said she was terrified.

"I peeked my head outside to see what's going on and the police start yelling at me, like, 'Come outside with your hands up,'" Deana Brown, the children's mother, said.

The police dogs were ready to go as 10-year-old Eric and his sister Briana walked out of their own home with their hands up. Their father was also ordered out of his home.

"I stepped out and I took not even three steps out the door, and I see a whole bunch of people running saying, 'He's got a gun,'" Eric Nabors, the kids' father, said. "I didn't have nothing on me, nothing in my hand, I don't own a gun. After they searched me, then they told me what they were looking for. 'We're looking for a black male suspect with dreads for a possible homicide in DeKalb'. They didn't believe me until they finally ran my name."

"It's terrifying to see like all the guns being pointed at me and my family and my brother," Briana said.

In short order, law enforcement realized that they had raided the wrong place.

"I don't believe this subject is going to be involved. I believe it's a miscommunicational," police said.

The murder of 25-year-old DeBrece Shields resulted in two arrests the next day.

Police said they arrested 18-year-old David Walls and 27-year-old Nico Griggs both from the Chicago area.

The family mistakenly put through a night of misery are considering whether a lawsuit against police is in order.

She says the family no longer feels safe in Sycamore and has been staying elsewhere with relatives. Authorities are looking for two additional suspects in what they say was a targeted murder in DeKalb.
Related topics:
illinoisi teamraid
Copyright © 2021 WLS-TV. All Rights Reserved.
I-TEAM
IRS says it's working 'as fast as possible' after complaints about tax refund delays
CPD officer charged in Jan. 6 attack on US Capitol
Reopening Illinois: Chicago, suburban businesses see busy day
Scammers are diverting whole IDES checks into their bank accounts
TOP STORIES
Rockton chemical plant explosion causes major fire, smoke
Carjacking safety tips: What to do if you are in a fake accident
Family of security guard killed in Gary to remember him at White Sox game
Sea otter diagnosed, treated for lymphoma at Shedd
45 shot, 3 fatally, in weekend shootings across city
Driver beaten in West Dundee road rage incident dies, police say
8 injured when vehicle plows into crowd at mud race in Texas
Show More
Car drives through crowd of protesters in MN, killing woman
Mayor Lightfoot announces new summer cultural events
What to know about the delta variant first detected in India
IRS says it's working 'as fast as possible' after complaints about tax refund delays
Security guard in custody after critically wounding man during argument near Grand Park
More TOP STORIES News