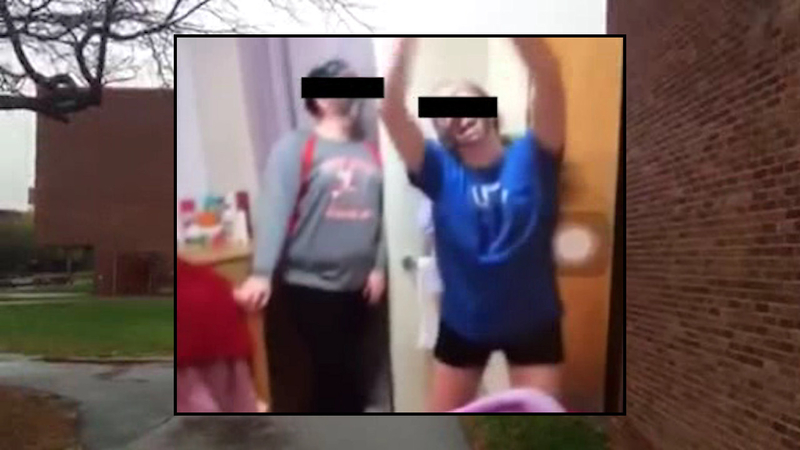 POTSDAM, New York -- A video of college girls wearing blackface has upset many at the upstate New York university. Now, the college is trying to see what they can do to prevent this kind of thing from happening again.

"I saw it and I was immediately angered by it," said Sekayi Williams, a student.

He was upset by sight of freshman girls, in blackface, dancing inside a dorm room.

It happened at SUNY Potsdam, a sprawling campus in upstate New York.

The students posted the video on social media Oct 22nd but quickly deleted it once others saw it.

19-year-old Williams from Brooklyn saw it.

Eyewitness News spoke with him via Skype and he said he knows one of the girls in the video, which included the caption "you're ruining culture."

"There was no turning back then, because what other culture could they possibly be talking about where twerking comes from, where did rap music come from," Williams said.

The person taking the video then appeared in another post with her face also painted black, hair in cornrows, and flashing a hand signal.

"This kind of behavior is not condoned by the university, it's not representative of who we are, in fact it's antithetical to our values," said Alexandra Jacobs Wilke, University Spokesperson.

A multi-layered investigation is underway.

Sources tell Eyewitness News, two of the three students have already moved off campus and are withdrawing from classes.

But the bottom line is that the university's hands are tied.

With no specific threat mentioned in the material, it doesn't meet the criteria for criminal prosecution, and doesn't violate the student code of conduct.

"Offensive depictions, including those such as blackface, are considered protected free speech under the first amendment," Jacobs Wilke said.

A task force is now being formed to take a second look at the code of conduct to see what changes if any can be made to prevent this type of behavior. They hope other SUNY campuses also follow suit.
Related topics:
educationsuny potsdamracismu.s. & worldsnapchat
Copyright © 2021 WABC-TV. All Rights Reserved.
More Videos
From CNN Newsource affiliates
TOP STORIES