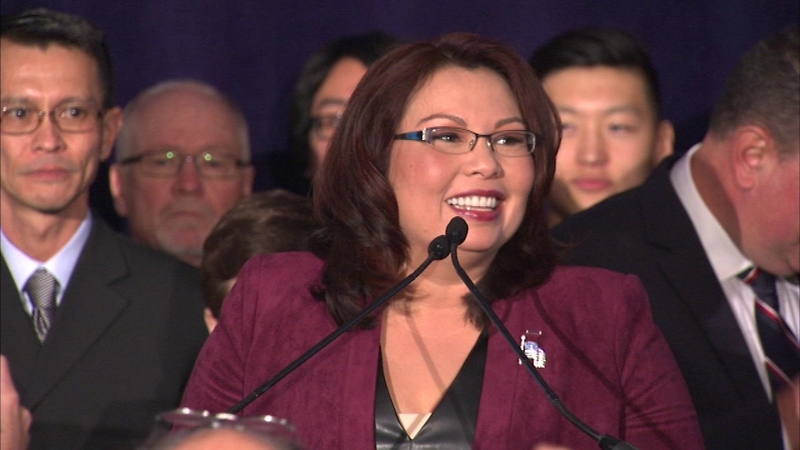 Duckworth elected to US Senate

Duckworth, a second-term congresswoman from Hoffman Estates, thanked Kirk in her victory speech Tuesday evening. She also thanked a fellow veteran in the crowd who helped her when her helicopter went down in Iraq, which resulted in her losing both her legs.

"I wake up every morning trying to be worthy of my crew," Duckworth said.

She told the crowd: "I will go to work in the Senate looking to honor the sacrifice and quiet dignity of those Illinoisans facing challenges of their own. After all, this nation didn't give up on me when I was my most vulnerable and needing the most help. I believe in an America that doesn't give up on anyone who hasn't given up on themselves."

At about 8:30 p.m., U.S. Sen. Dick Durbin, D-Illinois, introduced Duckworth with glowing praises to a cheering crowd at the JW Marriott Hotel in Chicago. Before that, Kirk gave a concession speech, telling a crowd in Northbrook that he called Duckworth to congratulate her and offer support. He also said he invited her for a drink at the Billy Goat Tavern to show that "opponents can peacefully bury the hatchet."

Thank you for making me the next senator from Illinois. This victory would not have been possible without your support.

Duckworth, who once led the Illinois Department of Veterans Affairs, has enjoyed the support of the state's Democratic establishment. A veteran, Duckworth said that veterans issues will form the basis of her legislative priorities in the Senate.

Duckworth was favored to win the Senate seat once held by President Barack Obama. The race was expected to impact the balance of power in the U.S. Senate.

Earlier Tuesday, she voted early and greeted supporters at a local diner.
"I feel very confident, but I don't take anything for granted which is why I'm still campaigning," Duckworth said.

Tammy Duckworth and Mark Kirk are vying for a U.S. Senate seat.

Kirk was seeking a second term and had been identified as one of the U.S. Senate's most endangered Republicans. He is one of only two Republicans to represent Illinois in the Senate in more than three decades.

Senator Kirk had brushed off polling that shows him trailing Duckworth. He said it was part of being a Republican in a traditionally blue state.

He also admitted to his own blunder, specifically a disparaging comment about Duckworth's ethnic background. He apologized, but left him with no room for error.

Kirk cast his ballot Tuesday afternoon in Northbrook and made a surprise choice for president.

He was one of the first Republican to voice opposition to GOP presidential nominee Donald Trump, opting for his own write-in candidate - four-star Gen. David Petraeus, who resigned as CIA director after pleading guilty to mishandling classified information.

"I want to set an example of someone who is honorable military leader who has been successful much better than Trump or Clinton," Kirk said.