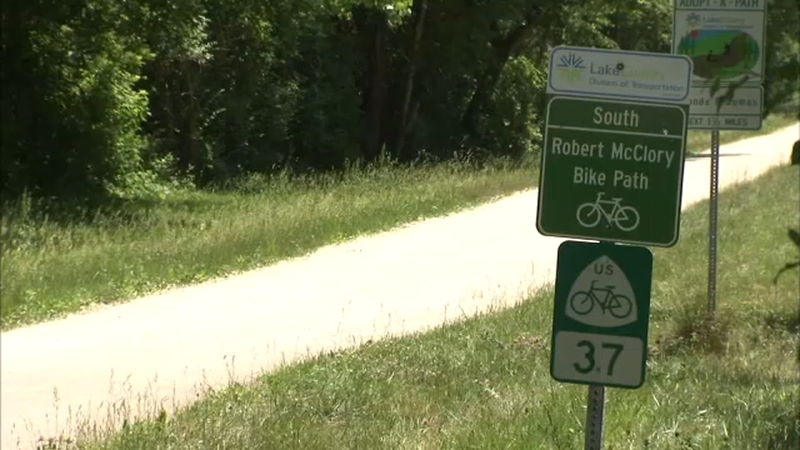 BEACH PARK, Ill. (WLS) -- Authorities are looking for a man who sexually assaulted a 16-year-old girl Monday on a bike path in suburban Beach Park.

Deputies responded about 7:30 p.m. to a report of an attack on the Robert McClory Bike Path, just north of Yorkhouse Road, the Lake County sheriff's office said in a statement.

The girl was walking on the path when a man emerged from the tree line, grabbed her by the neck, pushed her to the ground and sexually assaulted her, the sheriff's office said.

The man said he had a gun but never showed one, according to police.

"I don't go on the bike path at night, because I would think it would not be safe at night, just in general, you're out in the woods," said neighborhood resident Ernie Freeman.

A witness heard the girl screaming, and began yelling to the girl to run for help, the sheriff's office said. The attacker ran and the witness called 911.

"We think that contributed to the attacker stopping the attack and fleeing. Certainly if that had not happened we'd have to think worst case scenario," said Lt. Chris Covelli, Lake County Sheriff's Department.

The girl has been treated and released from the hospital, the sheriff's office said.

The suspect is described as possibly in his 20s and about 5-foot-11. He had "numerous metal hair barrettes in his hair," the sheriff's office said.

During a search for the suspect, a K-9 tracked the attacker to an area where he may have fled in a vehicle.

"It is concerning, I usually tell my wife even during the day, my daughters, that they shouldn't be on the bike path alone," saod Freeman.

Anyone with information can call the Lake County Sheriff's Criminal Investigations Division at 847-377-4000.