ESPN
By Joe McDonald
What do you need to know about the weekend's big stories? Joe McDonald gives us his take on the biggest and best. This is where we say, "Morning, Joe."

Gaudreau's return provides boost: After breaking his finger on Nov. 15, Calgary Flames forward Johnny Gaudreau was expected to miss six weeks. It took him just three weeks to return, and he wasted no time in having an impact in his first game back, scoring a goal and adding an assist to help the Flames defeat the Anaheim Ducks 8-3 on Sunday. Gaudreau had missed 10 games but his teammates kept rolling during his absence, going 8-3-1 in their past 12 games. Any time a young player returns to the lineup after missing a significant amount of time, especially if he's respected by his teammates, it provides an immediate boost. Gaudreau's return was met with a scoring onslaught as the Flames scored five goals in a span of 6:06 in the second period en route to victory. Believe it or not, despite how they started, the Flames are only three points back of the top spot in the Pacific Division, and Gaudreau's return will help Calgary remain in the mix.

Jackets pouring them in: If you shoot the puck, you're going to score. If you score, there's a better chance you'll win. That's exactly what's happening for the Columbus Blue Jackets. They set a franchise record with 60 shots during Saturday's 3-2 shootout win over the Arizona Coyotes. It was the Blue Jackets' third straight win, and they improved to 8-1-2 in their past 11 games. The team's five regulation losses are the fewest in the league. Columbus ois third in the Metropolitan Division and only three points back of the New York Rangers for the top spot.

Crawford's absence might be good: Not having goalie Corey Crawford, who had an appendectomy on Saturday and will miss two to three weeks, could actually help the Chicago Blackhawks. Their overall offensive numbers are solid, with 74 goals in 27 games. However, they have allowed 68 goals in that span. The Blackhawks rely on Crawford too much, and too often the outcome is on his shoulders. This season he is 12-6-2, has a 2.27 goals-against average and a .927 save percentage. The Blackhawks now need to play better overall defense in front of backup Scott Darling while Crawford recovers. This will also be an opportunity for the Blackhawks to give goalie prospect Lars Johansson a look. He was recalled from the AHL, where he was 6-7-1 for Rockford. 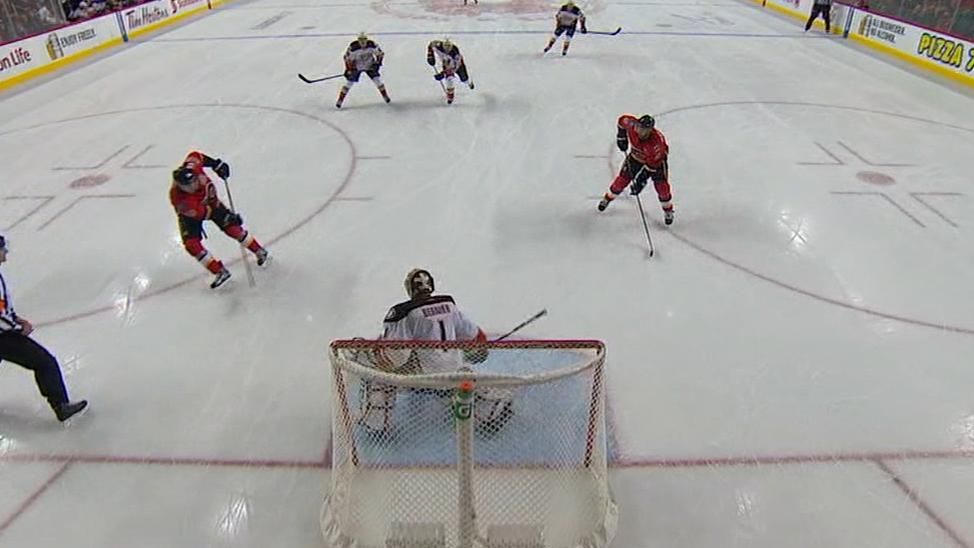 Gaudreau, Giordano open and close scoring for Flames
Johnny Gaudreau gets the Flames on the board with a goal in the first period, and Mark Giordano closes it out with Calgary's eighth goal of the game in a victory over the Ducks.
Related topics:
sportsespnrookieschicago blackhawksscoring raceinjuriesyoung playerscolumbus blue jacketsjohnny gaudreaustanley cupnhlcorey crawfordsuperstarspresidents trophyplayoff raceeastern conferencecalgary flameswestern conference
Copyright © 2020 ESPN Internet Ventures. All rights reserved.
More Videos
From CNN Newsource affiliates
TOP STORIES