WLS
By Michelle Gallardo
CHICAGO (WLS) -- A 19-year-old who lost both legs during in a car crash last year got a new set of prosthetic legs thanks to a Boston Marathon bombing survivor.

Heather Abbott was cheering on marathon runners in 2013 when she was hit by the second of two bomb blasts. As a new leg amputee, she quickly realized she would need not one, but four pairs of prosthetics, costing between $20,000 and $70,000 to get her life back to normal.

"Other amputees aren't as fortunate," Abbott said. "The only reason I was able to have all of them was because of the generosity of people all over the country contributing to the Boston One Fund."

Thanks to the Heather Abbott Foundation, Vidal Lopez got a new set of custom-made, state-of-the-art legs.

Last summer, Lopez was in Mexico when the devastating crash occurred, just weeks before starting college there.

Without insurance, Lopez was told he might never walk again. But the foundation stepped in.

"The legs he had previously were only capable of keeping him upright, walking at one speed," said prosthetist David Rotter.

The foundation's extraordinary gift was a game changer, Lopez said.

"With this one I can walk normally," he said Monday. "It changed my life."

Lopez will still going to rehab three times a week.

He hopes his doctors will discharge him in time to enroll back in college next fall, where he tells us he plans to major in bionic engineering. 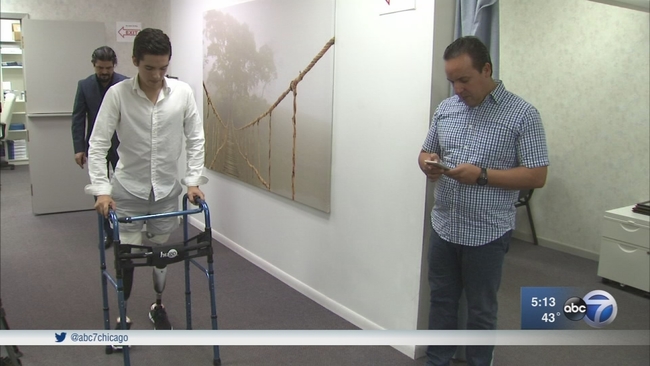