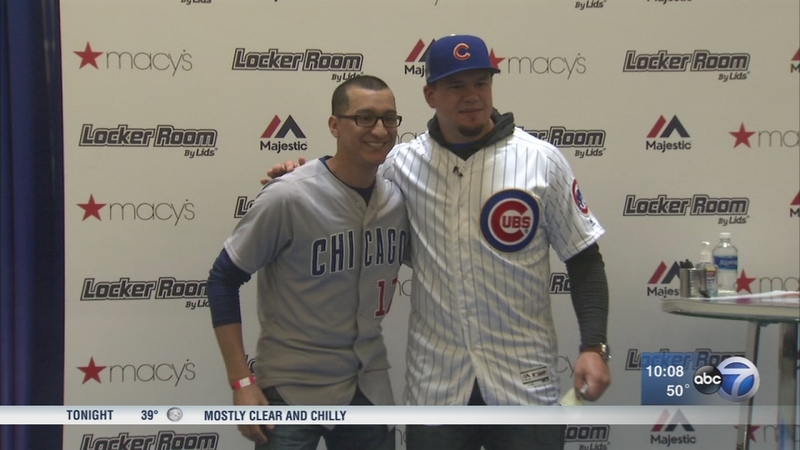 CHICAGO (WLS) -- Even though the Cubs were off Tuesday, the players were busy making appearances throughout the Chicago area.

One of the highlights of the day was a street being named for Javy Baez in front of a huge crowd was on hand for the big event.

It's not that often that the Cubs have a day off in the middle of the season and they took full advantage of it Tuesday.

The line stretched around the park as Cubs fans waited hours for a chance to spend a few seconds with the World Series trophy.

There's lots of Cubs fans in Humboldt Park and a lot of Puerto Rican pride, especially in the only Puerto Rican native in the Cubs' World Series lineup, Javier Baez.

"Baez is Puerto Rican. Humboldt Park itself. Not only that, this is history. This is amazing. Latinos getting together, being united," said Milza Bonet, a Cubs fan.

The championship trophy arrived around 10 a.m. at Little Cubs Field. The first 500 people in line got a wristband to take a picture next to it.

Baez was the only Puerto Rican player on the Cubs roster when they won the World Series last year. Fans said they believe that although his time in baseball and the Chicago community has been short, he is still a role model for the Latino community.

"I'm super excited because he is my favorite baseball player and I want to be just like him when I grow up," said Frankie Cruz, another Cubs fan.

And with that, the new street sign for Javy Baez Way was unveiled, right through the heart of Humboldt Park.

"Baez is an inspiration for many of our youth," said 26th Ward Alderman Roberto Maldonado.

Many of Baez's teammates were also meeting with fans around town.

At O'Hare Airport, Anthony Rizzo, Willson Contreras and Mike Montgomery welcomed passengers to the home of the World Series champs.

It was an unusual place for batting practice, but the Chicago River made for a nice target for reigning National League MVP Kris Bryant.

"We love it, I mean we play for the best team in the best city. I couldn't imagine having it any other way," Bryant said.

Kyle Schwarber took questions from the crowd gathered at Macy's including a tough one: Who is the hardest team to beat?

"It's a cute question. I would probably say ourselves," said Schwarber.

All this happened while armed security guards transported the Cubs' World Series rings from a bank vault to Wrigley for Wednesday's ceremony. The players seem to be enjoying the attention.

Tuesday night, Cubs manager Joe Maddon is being honored for being on the cover of "Michigan Avenue" magazine.


The Chicago Cubs home opener was a dramatic and emotional event. Some fans wiped the tears from their eyes as the defending champions raised the World Series banner Monday night at Wrigley Field.

Then the same fans had to wait out a two-hour rain delay. But when things picked up, they really got going. In the bottom of the ninth, the game was tied. Then first baseman Anthony Rizzo sliced the ball into left field for a walk off and the Cubs won, 3-2.
The game ended at 12:38 a.m. Many fans may be tired Tuesday morning, but they must have had sweet dreams.

Once the tarp was lifted around 8 p.m. Monday, Rizzo led his teammates into the bleachers, pulled on a rope and raised the banner Cubs fans have been waiting more than a century to see.

"I'll remember this day for as long as I play baseball. I mean, the walk off caps it off. But that pregame ceremony, I really, honestly, didn't think it will be that, how amazing the job the Cubs did and the video and the tribute, it was amazing," Rizzo said.
That championship flag will now fly forever. Cubs President Theo Epstein said that feeling of being part of something that is bigger than themselves will last forever, too.

Wednesday will be another big day for the Cubs. They'll get their World Series rings. Fans can watch the ceremony live right on ABC7 starting at 6:20 p.m. That's followed by the Cubs versus the Dodgers, also on ABC7.
Related topics:
sportswrigleyvillelakeviewhumboldt parko'hareloopwrigley fieldchicago cubs
Copyright © 2021 WLS-TV. All Rights Reserved.
RELATED 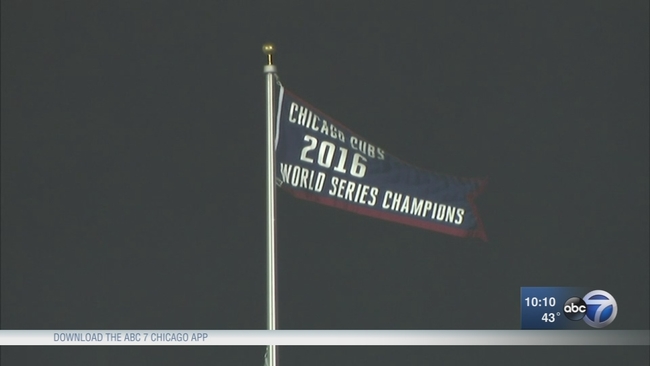