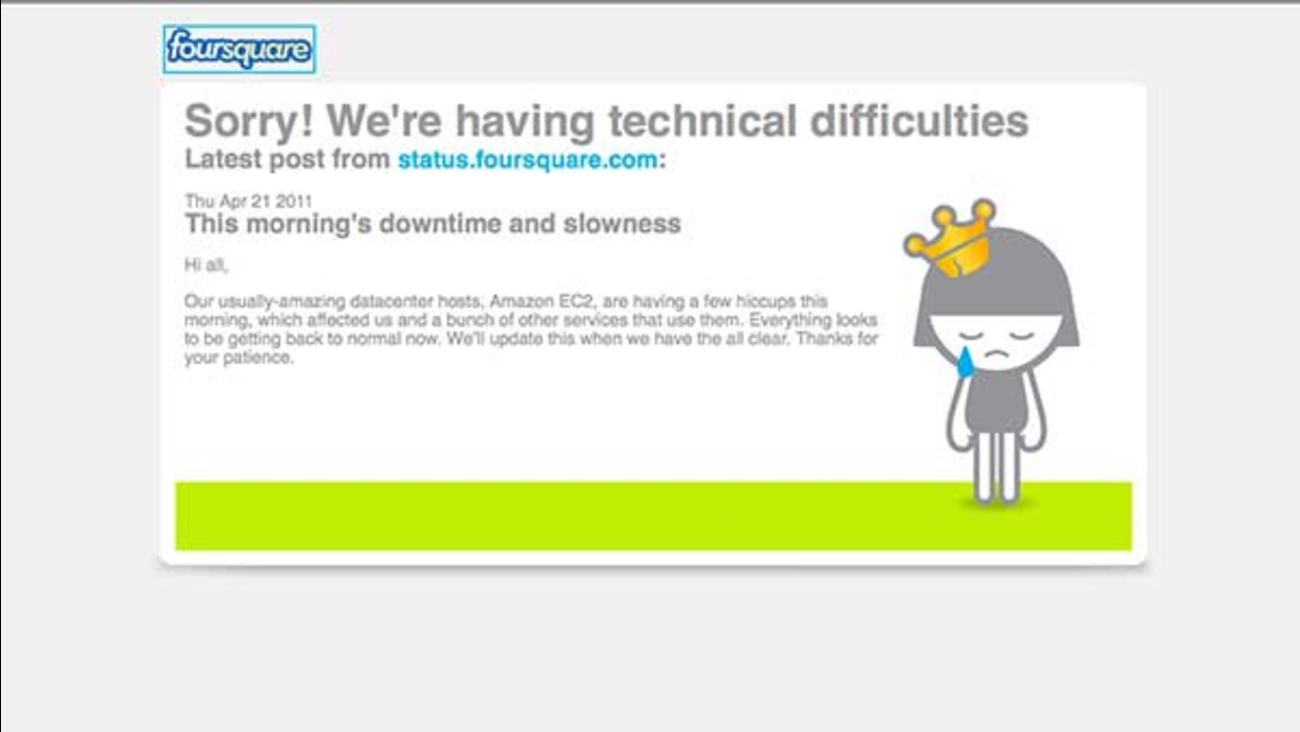 In this screen shot of the fousquare.com website, an apology for technical difficulties is displayed (AP Photo/foursquare.com)

MIAMI (WLS) -- It's well known that when a person takes steps to make amends for a wrongdoing, the victim is more inclined to forgive and forget. However, exactly why that happens is less obvious and poorly understood.

In a recent study, University of Miami researchers say they've made progress in explaining the psychological processes that make forgiveness happen.

Their findings show that peacemaking efforts such as apologies, offers of compensation and owning up to one's responsibility increase forgiveness and reduce anger by making the aggressor seem more valuable as a relationship partner and by causing the victim to feel less at risk of getting hurt again by the transgressor, a UM news release says.

"All of the things that people are motivated to do when they have harmed someone they care about really do appear to be effective at helping victims forgive and get over their anger," said Michael McCullough, professor of psychology in the University of Miami College of Arts and Sciences and principal investigator of the study. "People often think that evolution designed people to be mean, violent, and selfish, but humans need relationship partners, so natural selection probably also gave us tools to help us restore important relationships after they have been damaged by conflict."

For the study, 356 young men and women completed questionnaires, as well as an eight-minute interview about the transgression they had experienced and their feelings toward the person who had harmed them, the release said.

The participants also spent four minutes preparing a short, first-person speech about the transgression and the transgressor; they then delivered the speech into a video camera, as if the camera were the person who had harmed them.

Finally, the participants completed a 21-day online survey to measure forgiveness. To describe their feelings about their aggressors, respondents chose from a list of statements such as "I'm trying to keep as much distance between us as possible," "I'm going to get even," "he/she wants our conflict to be over," and "he/she does not intend to wrong me again," among others.

"It's one of the largest, longest, and, we think, most definitive studies of the effects of conciliatory gestures on human conflict resolution ever conducted," McCullough said.

One basic scientific implication of the results is that humans have a psychology for conflict resolution that is very much analogous to the psychology that other non-human group-living animals have for restoring valuable relationships.

"Many group-living vertebrates, but particularly mammals, seem to use 'conciliatory gestures' as signals of their desire to end conflict and restore cooperative relationships with other individuals after aggressive conflict has occurred," McCullough said. "We seem to have a similar psychology as well."

The study, "Conciliatory gestures promote human forgiveness and reduce anger," is now published in the journal Proceedings of the National Academy of Sciences. Other authors are Eric J. Pedersen; from UM's Department of Psychology; Evan Carter, from University of Minnesota, and Benjamin A. Tabak from University of California, Los Angeles. All the co-authors were graduate students at UM's Department of Psychology at the time the work was conducted.