Bears convinced in their belief that Mitchell Trubisky was worthy No. 2 pick 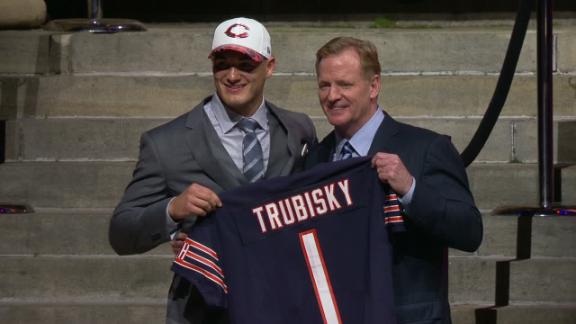 "As an organization, we had conviction on this quarterback and his special attributes and we did what we had to do to get him," Pace said Thursday night. "His potential to be a championship quarterback is all we focused on in this move. We feel we have the perfect environment for his development.

Pace, who surrendered picks 3, 67, 111 and next year's third-rounder to San Francisco, said he felt pressure to take Trubisky before another quarterback-needy team beat him to it. Pace, however, could not confirm if the 49ers had another trade offer on the table for No. 2.

Trubisky, who had just 13 starts in college, is the highest-drafted quarterback by the Bears in the common draft era and the first quarterback taken in the first round by Chicago since Rex Grossman in 2003. He said he didn't think starting so few games at North Carolina is an issue.

"I'm going to come in and learn as much as I can from Mike [Glennon]," he said. "I'm always going to compete and do my thing. Push the guy in front of me. When I get my opportunity, I look forward to taking full advantage of it.

"I think I've had great experience starting 13 games, playing in 30, been around a lot of football. I'm only scratching the surface. Sky is the limit."

Trubisky told ESPN after his selection that he had no idea the swap with San Francisco was happening and that he did not get a call to alert him to his selection.

"I didn't think I was going to get picked until the commish made the call," he said. "It was crazy. It's a dream come true. It's as surreal as it gets."

The Bears had a clear need at quarterback after they released Jay Cutler, but most expected them to wait to address the position through the draft. Glennon is scheduled to earn $16 million guaranteed in 2017, and the organization refused to put any timeline on when Trubisky will be ready to play.

Pace, though, defended the aggressive nature of his selection.

Bears trade up to draft Trubisky
The Bears move up one slot to the second pick to take Mitchell Trubisky in the 2017 NFL Draft.

Trubisky ready to get to work with Bears
Mitchell Trubisky expresses how excited he is to be drafted 2nd overall by the Bears and how the process played out for him.
Related topics:
sportsespnsan francisco 49ersnflmitch trubiskychicago bearsnfl draft
Copyright © 2020 ESPN Internet Ventures. All rights reserved.
More Videos
From CNN Newsource affiliates
TOP STORIES