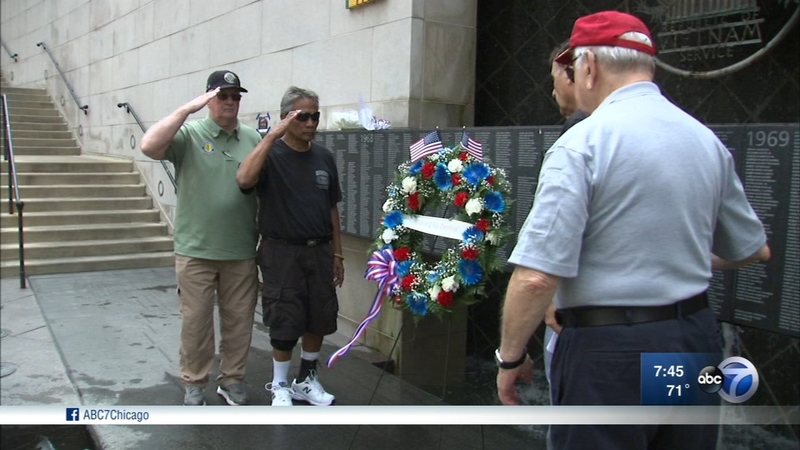 CHICAGO (WLS) -- During the 1968 Democratic National Convention in Chicago, protesters clashed with police, shouting and arguing against the Vietnam War. But there was one group who didn't have a voice at the time - service members fighting in Vietnam.

At the end of the 50th anniversary of the DNC protests, they are speaking out about seeing, or at least hearing, about the convention clashes from afar.

"That's all they focused on was the protesters. What they forget is that people were fighting and dying in Vietnam," said James Balcer.

Balcer served in the Marines and earned three Purple Hearts and a Bronze Star for helping comrades carry dead and wounded members up a mountain. Fifty years later the former Chicago alderman is still incensed at what he remembers from the DNC clashes at the time.
"What bothered me the most is the protesters - not all - but some carried Viet Cong flags and North Vietnamese flags," Balcer said. "These are the people we're fighting and they are supporting them, not us!"

And 1968 proved to be the deadliest year of the war. That's why Balcer, along with other Vietnam veterans, gathered this week to remember service members who died overseas while the convention was happening. The special ceremony included reading about 300 names of service members.

Terry Vorderer had just returned home from the front lines when he heard about the protests.

"I think it's the day, the day I became a Republican," said Vorderer.

He thought about going downtown to see the protests in person, but decided to avoid the clashes because it could jeopardize his plans to become a police officer, which he later realized.

"War, the demonstrations...made me the best policeman I can be. I kind of realized, I could always put a handcuff on you, but I can accomplish more by listening to you," he said.

News about the clashes trickled to boot camp, where Charles Padilla used an AM radio to get updates from Chicago. Still, he didn't get very much information.

"We heard about the convention, but to what extent, not a lot of it," Padilla said.

Other Chicagoans were still fighting overseas.

"The military kept a lot of information from us. It wasn't like we had radios and newspapers there. Most of the stuff we heard from was letters from home," said Barron Buchunas.

Even though the protesters were spotlighting the war, some Chicago families who had loved ones serving didn't seem to talk about all the violence and problems. Donna Fiore had two brothers serving in the military at the time of the protests. One of her brothers, Michael Kuropas, was killed April 15, 1970.

"It was heartbreaking," said Fiore, who remembers wondering how the protesters were able to financially support themselves. Still, Fiore said she sided with her brothers and their service, and still thinks about both of them.