June Lee, 54, and 63-year-old Hyung Kim are each charged with one felony count of violating the counterfeit trademark act, according to a statement from Wheeling police. Authorities initially suspected a factory in Wheeling was producing fake sports apparel but their investigation led them to a factory at 1229 Rand Rd. in Des Plaines, police said. 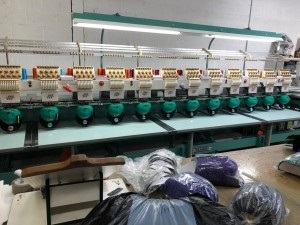 Investigators confiscated over 125,000 items worth over $2.5 million, including over 40,000 products bearing the logos of NFL, NHL, MLB and NBA teams, police said.

Lee, of Buffalo Grove, was released on a personal recognizance bond and is scheduled to appear in court March 11, according to Cook County court records.

The NBA All-Star Game is bringing big names and plenty of counterfeit jerseys, hats, and other merchandise to Chicago.

Kim, of Gurnee, is set to appear at a bond hearing in Rolling Meadows.