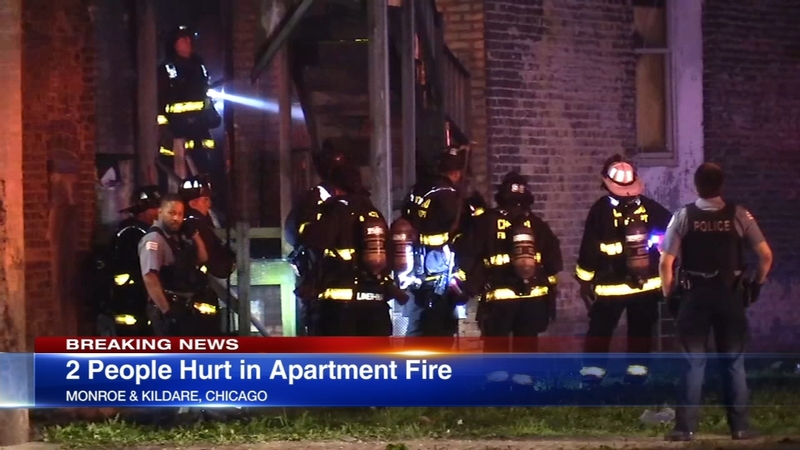 CHICAGO (WLS) -- Two people were critically injured after they tried to jump to escape a fire at an apartment building on Chicago's West Side.

The man and woman tried to jump, but a porch started to buckle after the blaze broke out around 3:15 a.m. in the 4300-block of West Monroe Street.

Johnathan Anderson crossed himself, saying a prayer on his bike looking at the aftermath. He witnessed both people trapped as a Good Samaritan tried to help coax them to jump to safety.

"As he was trying to encourage her to do that, time went past. Next thing you know, when she finally got the courage to let go and do it, the wood buckled as soon as he caught her. But it don't seem like they landed too hard to nothing," Anderson said.

Just as the woman was about to jump, the burning porch partially collapsed, bringing her down, along with the other victim. They fell from the third floor onto the grass below.

"I didn't know what to do. You don't see stuff like this all the time. So when you see something like that, it'll make you freeze because you don't believe it," Anderson said.

The man and woman were taken in critical condition to Stroger Hospital. They suffered serious smoke inhalation, burns and other injuries.

"This an unoccupied building. It appears that they were squatters in the building," said Deputy Chuck Maes, Chicago Fire Department.

Firefighters said the fire started on that back porch and spread into the building, where neighbors said squatters have been known to smoke.