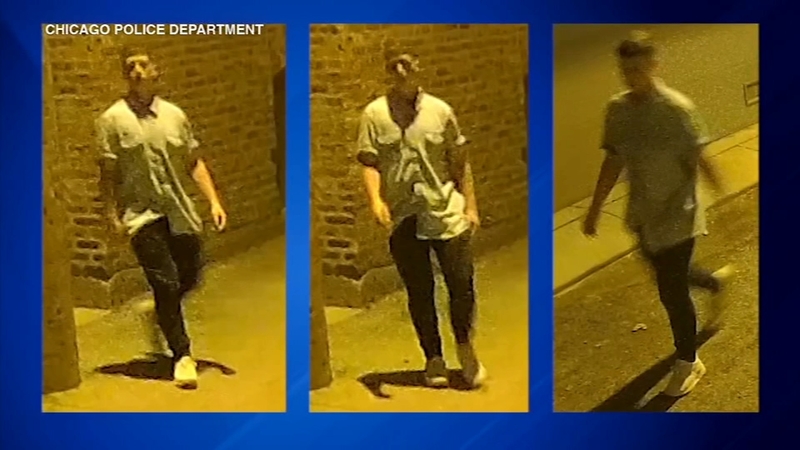 CHICAGO (WLS) -- Chicago police have a major clue that could help find the man who sexually abused two young girls, ages 11 and 13, in their bedrooms in the city's Lincoln Park neighborhood.

Police released video Wednesday night showing a person of interest walking down an alley around 2:15 a.m. Sunday. Alderman Michele Smith (43rd Ward) said in an alert sent out earlier this week that he got in using doors that were left unlocked.

The first incident happened in the 400 block of West Belden Avenue. Police said the man came into the bedroom of a 13-year-old girl and sexually abused her while she was sleeping.

A security camera across the alley in the 400 block of West Belden captured video of a man casually walking into- and a short time later- out of the building.

About 20 minutes later, in the 500 block of West Grant Place, a sleeping 11-year-old girl was sexually abused.

"That's pretty blurry," said Brad Walker who is living nearby. He was unable to identify the man. "I walk here during the day, and it's really quiet. Mostly women pushing strollers. But at night the bars on Lincoln let out and people walk back through here and there's lots of rowdiness," said Walker.

Police described the suspect as a white male between 20 and 30 years old with short brown or strawberry blonde hair. He is about 5 ft. 6 in. or 5 ft. 7 in. tall and weighs about 160 pounds. Police also said the suspect is a smoker.

Alderman Smith reminded everyone in her ward to lock their doors and remain vigilant. In both instances the suspect entered through unlocked doors.

Neighbor Mary Markis said, "There is a real sense of community here. But there is also a false sense of security and people need to be more careful."

The neighborhood is filled with private security cameras on homes. And the latest crimes have more people installing them.

Kathy Moore has lived in the neighborhood 47 years. "This is the first time I can remember being as concerned about safety and locking our doors," said Moore.

People who live in the neighborhood said they had been waiting for the surveillance photos to come out ever since they heard about what happened to the two girls over Memorial Day weekend.

"It's extremely mortifying," said Tim Petersen, who lives near where the second attack occurred.

"This is a whole different level of concern, I think, for everybody," said Katherine Erwin, who lives near where the first attack occurred. "I'm not sure we would have noticed him as anyone suspicious in this neighborhood."

Many neighbors said young people cutting through the alleys is pretty common at that time on a holiday weekend.

"It appears that he would blend in pretty well in the neighborhood, so no one would necessarily have picked him out," said Michele McVey, who lives near where the second attack occurred.

Neighbors said they have made a special effort to lock up. Some even installed security cameras.

"I hope somebody, if they notice that person, know who it is, definitely turn them in," Petersen said.