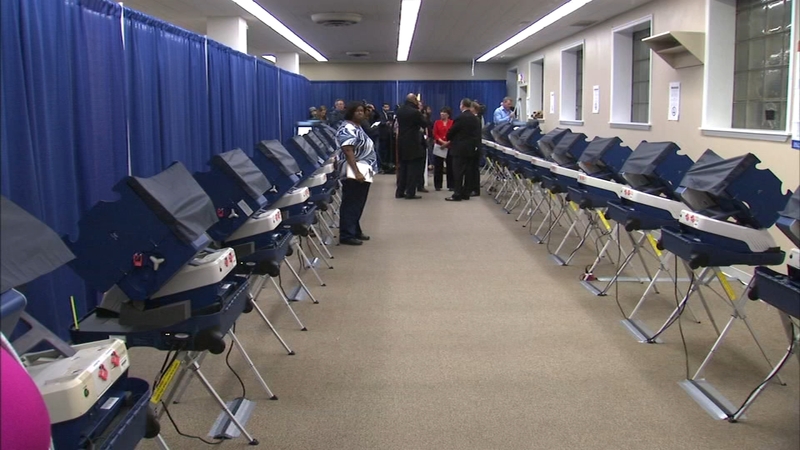 CHICAGO (WLS) -- As the U.S. midterm campaign enters its own witching hour, with the polls set to open in six days, White House officials on Wednesday said they were prepared to put an elaborate Election Day security plan into play.

In a high-level briefing call, the Election Day security blueprint was described as an "unprecedented, full government response."

According to one senior administration official on the call with the I-Team and other news organizations, national Election Day security was described "like the Super Bowl almost," treated as a national security event involving a range of federal partners that gather and synthesize possible threats.

The main concern expressed by federal authorities is direct interference by America's "foreign adversaries" on Election Day. A senior intelligence official said that federal investigators were most concerned about Russian, Chinese "and other foreign actors including Iran." Authorities said that interference attempts could reach into state and local databases, voting systems and voter information.

"That fundamentally wrecks the national process," said a senior administration official and has to be met with "swift and severe action." Specific retaliation by the United States was not detailed.

After hackers infiltrated voter databases in Illinois and several other states in 2016, federal election officials and law enforcement agencies began working on plans to shore up IT defenses. According to Trump administration officials they conducted a three day tabletop exercise involving most states that was aimed at protecting local voting systems.

"The progress we've made since 2016 is immense," said one federal official involved in the exercise.

"Interference from our foreign adversaries will not be tolerated," said a senior intelligence official.
Two weeks ago Illinois election officials announced that the National Guard here would be on stand-by to respond to any digital chicanery or outright attacks on state voting systems.

In September President Trump signed an executive order that would allow new sanctions against any country found to meddling in the U.S. election. Administration and intelligence officials stressed on Wednesday that their security efforts are not aimed at controlling voter turnout or outcome of any election-but rather preventing foreign inference with the process and a rapid response if there is any.
Report a correction or typo
Related topics:
politicshackingvotingelection 2018the white housei team
Copyright © 2022 WLS-TV. All Rights Reserved.
I-TEAM
IN man pleads guilty to being in US Capitol during Jan 6 insurrection
Could remains in shrinking Lake Mead be tied to Chicago mob?
I-Team: Postal Protection
ISP combating expressway shootings with new technology, tactics
TOP STORIES
9 shot, 2 fatally, on Near North Side
Chicago mass shooting victim ID'd as father of 2, with twins on way
Officer relieved of powers after teen carjacking suspect shot: CPD
United cancels couple's flight, charges $4K more for same seats
Doja Cat drops out of Lollapalooza due to throat trouble
Wild shootout at 7-Eleven store caught on video
Legendary Cubs pitcher 'Fergie' Jenkins immortalized with statue
Show More
South Side high school fight leaves multiple teens injured
Illinois undercounted by nearly 2% in 2020 Census, bureau admits
IN man pleads guilty to being in US Capitol during Jan 6 insurrection
Lakeview Food Pantry renamed Nourishing Hope amid expansion
Safety top of mind as many prepare for boating season
More TOP STORIES News