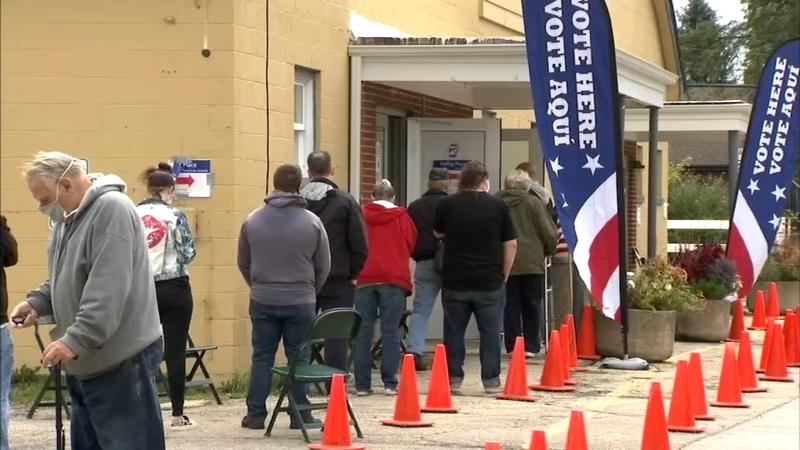 The president held rallies in Iowa, North Carolina, Georgia and Florida. He began the day in Michigan, where he made an appeal to suburban women, a key group that helped him win four years ago.

"They want to close down your factories, ship your jobs to China, eliminate private health care, destroy the suburbs. The women of the suburbs, you've got to love me," Trump said.

ABC 7 Political Analyst Laura Washington said this an approach he is taking as part of utilizing multiple strategies.

More than 93 million Americans have cast their ballots. Democrats pushed for early voting and vote by options, which has helped Biden. Republicans are counting on a big election day turnout to help President Trump.

"I like Election Day and most of you do too. Who is going to vote on Election Day," Trump asked.

"We have to earn our democracy. We have to go out and vote," Biden said.

Experts are cautious that while polling has improved since four years ago, it may not tell the whole election story.

"It's looking more and more likely based on the polls that Joe Biden has a comfortable lead in the popular vote. What he's got to be looking at closely and being worried about is the electoral college. That is where Donald Trump could prevail again," Washington said.

The president will hold a rally in Kenosha, WI, one of five stops Monday that also include two in Michigan. Joe Biden will spend Monday going across Pennsylvania and also has a plan to stop in Ohio.

President Trump will not visit Illinois leading up to the election, but some of his supporters rallied in the southwest suburbs, outside of the Firewater bar. They waved Trump signs while also pushing for the reopening of Illinois.

Blagojevich, who was convicted on public corruption charges, had his prison sentence commuted by President Trump. He stood on stage showing his support for the president.

"This is why I am a Trump-ocrat. He is remaking the Republican party," Blagojevich said.

The rally also focused on local and state Republican candidates. All the speakers talked about reopening Illinois despite the rise in COVID-19 cases.

"We need our businesses open and our jobs in full force and this lockdown is just going to put us deeper and deeper into poverty, and it is going to hit the black community more than anybody," said Devin Jones, 18th Ward Republican committeeman. "There is a lot of black support. There is black support for reopening businesses, for owning our communities, for owning our homes."

"I really love President Trump. Strongly, strongly in favor of him for another four years," said Mary Krueger, a local nurse.

Krueger said she has seen the effects of the COVID-19 pandemic in her hospital daily. She still throws her support behind President Trump, who is for reopening communities.

"He got all the ventilators out to the hot areas right away. He banned the travel from China, and you know, obviously, the man did catch the disease himself and he did well," Krueger said.

RELATED: Trump says 'I feel much better,' but doctor says he's 'not yet out of the woods' amid COVID-19

In a last-minute campaign dash, Pennsylvania, Georgia, and Iowa are just some of the states candidates on both presidential tickets rallied in on Sunday.

More than 92 million people have already voted but there are still two more days to go in the 2020 presidential election.

With less than 48 hours until Election Day, the candidates are blitzing battleground country.

His first stop was in Michigan where he is once again making his case to suburban women.

"They want to close down your factories, ship your jobs to China, eliminate private healthcare, destroy the suburbs," President Trump said to his supporters. "The women of the suburbs, you've got to love me."

More than 92 million people have already voted but there's still two more days to go in the 2020 presidential election.

The president's handling of the coronavirus pandemic continues to be a key issue as his campaign says voters want life to get back to normal.

"You look at these Democrat-run states like Pennsylvania, Michigan, Wisconsin. We're seeing this on the campaign trail with the rallies, people are tired of these lockdowns. They want to safely re-open," said Trump campaign senior adviser Jason Miller.

In Pennsylvania, where polls show a tight race, Joe Biden has taken aim at the president's leadership.

His campaign appearing confident they will win some of the battleground states Trump carried in 2016.

"Instead of the number of contested battleground states shrinking, which is normally what you see at this point in a campaign, the number has actually expanded so that we are now campaigning also in Georgia, in Iowa, in Ohio," said Biden campaign senior adviser Anita Dunn.

A federal judge will hear arguments Monday in a case brought by Texas conservatives challenging more than 100,000 ballots cast at 10 drive-through locations in Harris County, which is largely democrat.

Joe Biden does not have any stops planned in the Midwest before Election Day, however, President Trump plans to hold a rally in Kenosha, Wisconsin Monday night.