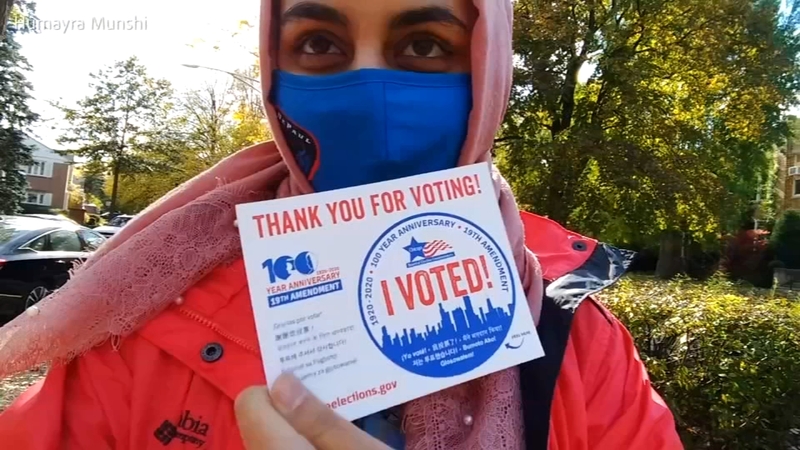 How young voters are preparing for upcoming election

CHICAGO (WLS) -- With Election Day inching closer, more and more voters are heading to the polls - many of them under 25 years old.

19-year-old Sarak Kamal is one of them. Like many other young voters, she's planning to vote in-person on Nov 3.

"If you're living in America and you're affected by the policies and you have the right to vote, there's no reason why you shouldn't because it's going to directly affect you and everyone that you know," Kamal said.

Kamal lives five minutes from her polling place and plans to go vote with her mother as soon as the doors open at 6 a.m.

"In 2016, I was a sophomore in high school and I remember feeling super frustrated because I felt like I was ready to vote and voice my opinion but I wasn't legally able to," Kamal said. "So me being able to vote now also means I'm voting for people younger than me."

"I don't know why I was so nervous. I think it's because I felt the importance of what I was doing and I didn't want to mess it up in any way," Munshi said. "I know a lot of people my age think our votes don't matter because at the end of the day it's up to the Electoral College - well, we influence the Electoral College."

In 2018, only 31% of Illinoisians between the ages of 18 and 24 voted. That means young voters were less than half as likely to vote compared to someone older than 65 years old.

When asked why they didn't vote, 31% of people said they were too busy, 15% didn't think their vote would matter and 13% said that they were out of town.

"Not voting is giving away your right to make a change for the future," said 19-year-old George Hampton.

Hampton voted by mail and sent off his ballot a couple of weeks ago to make sure it would be counted on time.

"Since it's my first time voting, I could pace myself and do it my own way rather than having to quickly fill it out and get done with it," he said. "I was excited, just having the option to choose who I wanted to be in the seat."

Regardless of how they voted, these young people are making sure their voices and opinions are heard - and they want their peers to do the same.

"Whether or not you think it matters for the presidential election, your vote definitely counts within your community so it's really important to get out there and vote," Munshi said.