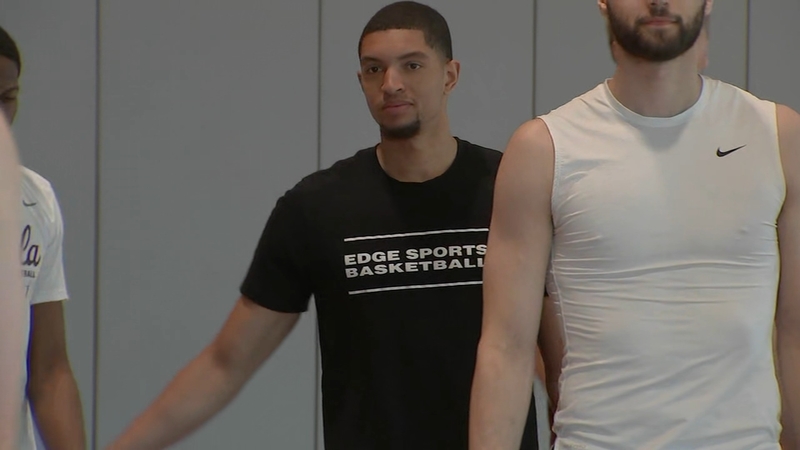 CHICAGO -- The Chicago Bulls drafted Arizona guard Dalen Terry with the No. 18 pick on Thursday night, adding size and versatility in the backcourt as they try to take another step after reaching the playoffs for the first time in five years.

The 6-foot-7, 195-pound Terry averaged 8 points, 4.8 rebounds, 3.9 assists, and 1.2 steals as a sophomore in coach Tommy Lloyd's first season. Owning a 7-foot wingspan, he can guard multiple spots. And on offense, he can play on or off the ball.

Chicago did not own a second-round pick.

The Bulls went 46-36 and made the playoffs for the first time since 2017 with All-Stars DeMar DeRozan and Zach LaVine leading the way. Chicago got off to a big start and finished with its best record since the 2014-15 team went 50-32 in former coach Tom Thibodeau's final season, though the way things unfolded down the stretch left a bitter taste.

The Bulls went from leading the Eastern Conference to finishing in sixth place. They lost 15 of their final 22 regular-season games, then got knocked out by Milwaukee 4-1 in their first playoff appearance since 2017.

Executive vice president of basketball operations Arturas Karnisovas has been aggressive in rebuilding the team since he was hired out of Denver's front office two years ago, acquiring DeRozan, Nikola Vucevic, Lonzo Ball and Alex Caruso. He also drafted Ayo Dosunmu and brought in coach Billy Donovan.

But Chicago was hit hard by injuries last season and struggled against the NBA's best. The Bulls were a combined 2-21 against the top four teams in each conference.

They also have a major issue hanging over them, with LaVine planning to test the market as an unrestricted free agent.

The high-flying guard is in line for a huge payday after making his second straight All-Star team. But he was also in and out of the lineup because of injuries, including an issue with his left knee that led to arthroscopic surgery a month ago.

The Bulls can offer a five-year deal worth about $212 million. The most he can get from another team is approximately $157 million over four years.

LaVine was far from the only Chicago player to miss time last season.

Ball sat out the final 3 1/2 months following surgery for a torn meniscus. Forward Patrick Williams, the No. 4 pick in 2020, missed most of the season because of torn ligaments in his left wrist. And Caruso was sidelined seven weeks because of a broken wrist following a hard foul by the Bucks' Grayson Allen during a game at Milwaukee in January.

The injuries made it tough to develop the continuity the Bulls needed in order to compete with the NBA's best, a point Karnisovas and players drove home after the season ended.

The ABC7 family will be rooting the hardest for former Whitney Young and Loyola star Lucas Williamson. His dad, "Big Luke" is a retired camera man at ABC7.

"Little Luke," as he's affectionately known, has worked out for 16 teams, including the Bulls.

The question for weeks leading into the NBA draft was whether the first pick would be Paolo Banchero, Chet Holmgren or Jabari Smith Jr.

The answer finally came Thursday night - and even Banchero didn't know it until moments before the announcement of the Orlando Magic's selection.

"I had a feeling from the information I was being told is that it was just kind of up in the air," Banchero said. "Orlando wasn't really sure yet, and just to be ready for whatever,

"I didn't find out, though, that I was actually getting picked until about 20 seconds before the commissioner got on the stage. I didn't even have time to really think about it or anything. It just kind of happened. I can't believe it, but I'm ready. I'm ready."

After leading the Blue Devils to the Final Four in coach Mike Krzyzewski's final season, the 6-foot-10 forward was called first by NBA Commissioner Adam Silver to begin the draft, beating out fellow first-year forwards Smith and Holmgren.
The order had been debated throughout the process, with Smith often considered the player who would go No. 1.

Instead, he wasn't even second, falling behind Holmgren to Houston at No. 3.

All the players picked looked thrilled, with Banchero among those crying or coming close as they hugged friends and family.

Wearing a purple suit full of bling, he received a loud ovation inside Barclays Center, where Duke lost in the ACC Tournament final.

The Magic were picking first for the fourth time and they've done well with their previous choices. They took Shaquille O'Neal in 1992, traded the rights to Chris Webber for Penny Hardaway the next year, and went with Dwight Howard in 2004.

All eventually reached the NBA Finals with the Magic.

Holmgren went second to the Oklahoma City Thunder after the 7-footer led the West Coast Conference in blocked shots, rebounding and shooting percentage at Gonzaga. He looked sharp in his black suit but may need it to eventually be a bigger size for success in the NBA, as he's listed at just 195 pounds.
He's not worried about that talk.

"I wake up every day with a plan on how to make myself a better person, better basketball player," Holmgren said. "I put so much effort into executing that, that it doesn't really leave room to put effort into things that, one, I can't control, and two, don't help make me better."

The Rockets were happy to end up in Smith who has the skills to go higher. The 6-10 forward from Auburn is a natural fit in the current NBA game, able to defend all three frontcourt positions and with a shooting stroke that allowed him to hit 42% behind the arc.

Forward Keegan Murray, after a huge leap in his second season in Iowa, jumped all the way to the No. 4 pick by the Sacramento Kings. The Detroit Pistons, a year after taking Cade Cunningham with the No. 1 pick, took athletic Purdue guard Jaden Ivey fifth.

Before the selections began, Silver congratulated the Golden State Warriors on their recent NBA championship and reminded fans that their core of Stephen Curry, Klay Thompson and Draymond Green was built through the draft.

All the teams at the top of this draft need help and have recent high picks already on their rosters, so will hope the Warriors way works for them as well.

Bennedict Mathurin, a Canadian who played at Arizona, went to Indiana with the No. 6 pick. The Portland Trail Blazers followed with Kentucky's Shaedon Sharpe, Dyson Daniels of the G League Ignite was taken eighth by New Orleans, Baylor's Jeremy Sochan stayed in Texas with San Antonio at No. 9, and Washington rounded out the top 10 with Wisconsin's Johnny Davis.