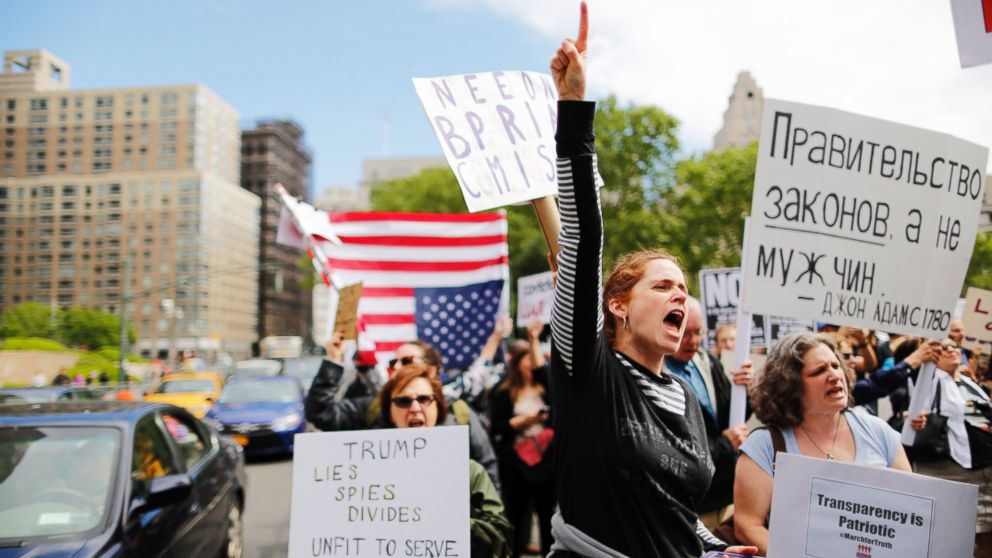 ABCNews
By KAELYN FORDE
Marchers took to the streets across the country today, calling for an independent commission to investigate the White House's alleged ties to Russia and demanding that Congress force President Trump to release his tax returns. Organizers said "March for Truth" events were planned in more than 135 cities, including New York, Washington, Portland, Oregon, and London.

"People have to understand that this is a president who not only is trying to lead a coverup of his own Russia ties, but he has a problem with the truth in general," Andrea Chalupa, an organizer with the March for Truth, told ABC News. "So we're here standing up for the truth."

In New York, crowds marched from Foley Square, and in Washington, demonstrators gathered at the Washington Monument. Chalupa said protesters in New York also planned to lay a wreath at the Bowling Green subway station, in reference to Trump advisor Kellyanne Conway's statements about the so-called Bowling Green Massacre, which didn't, in fact, take place. Conway later acknowledged the mistake and corrected her statement on Twitter.

Trump supporters held their own rally on Saturday in Lafayette Square across from the White House. The "Pittsburgh Not Paris" event, organized by the Fairfax County Republican Committee and the Republican Party of Virginia, saw about 200 people gather to show their support for the president's decision to withdraw from the Paris Climate Agreement this week. Pulling out of the Paris Accord was a Trump campaign promise his supporters lauded him for keeping.

Timothy Snyder, professor of history at Yale University and the author of "On Tyranny," said he felt he had to take pert in the March for Truth.

"The issue with the Trump Administration is no longer the traditional issue of transparency, it's the issue of fiction," Snyder said. "To say they are not transparent isn't even beginning to characterize it. So for me, the investigation is about Russia, of course, and the myriad connections between Trump's people and Russia, but it's also about fact versus fiction.

"For that reason, we are at a major crossroads about what kind of country we want to be," he added.

For its part, the Trump administration has denied allegations of illegal activity. The Kremlin also has denied the Russian government was behind the cyber campaign to undermine the 2016 election.

Chalupa said organizers began planning the march a few weeks ago and, despite the tight timeframe, felt it was necessary to move forward with Saturday's plans.

"The big events of just the last couple weeks -- FBI Director Comey being fired, the revelation that the Trump Administration tried to lift Russian sanctions -- all of this points to the need for an independent investigation into Trump and Russia," Chalupa said. "The public needs whatever information it is allowed to have that's not classified. We need as much information as possible, and that includes his tax returns, to see if there are any financial connections between Trump and Russia."

Trump has repeatedly said on the campaign trail and while in office he does not have financial interests in Russia.

"March for Truth" organizers said participating organizations include MoveOn.org, Rock The Vote and the Womens March, which organized large-scale protests across the country on the day after Trump's inauguration.

Paola Mendoza, the artistic director of the Womens March, was among those marching in New York on Saturday.

"I firmly believe that the success of the resistance depends on the intersectionality of all our movements," Mendoza told ABC News via email. "The Women's March stands side by side with the March for Truth because when we fight for truth, we are also fighting for the undocumented communities, for women, for our Muslim brothers and sisters and our planet."

Marchers said making their presence felt was important, even if the White House does not acknowledge it.

"The funny thing is about protesting is that it makes you feel better as a person and as a citizen to be with other people who are thinking and acting," Snyder told ABC News. "That's what you get out of protest: you feel like a better American."
Report a correction or typo
Related topics:
abc newsnational
Copyright © 2020 ABC News Internet Ventures.
More Videos
From CNN Newsource affiliates
TOP STORIES